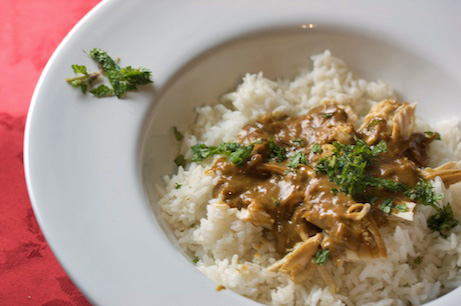 This curry is spicy and delicious! I bought a chicken that was already cut up and skinned so that I wouldn’t have to bother with it, and it worked out wonderfully. By the end of the cooking, the chicken was falling off the bones, so I shredded it up and put it on top of basmati rice. It was a really warm and satisfying meal.

1. Heat the oil in a large skillet over medium-high heat. Add the onion and cook, stirring, until it is light brown around the edges, about 5 minutes.

2. Lower the heat to medium and add the chicken pieces, meat side down. Cook until they have browned, 2 to 3 minutes per side. Transfer the chicken and onion to a plate.

3. Pour the vinegar into the skillet, and add the Garlic Paste, coriander, cumin, cayenne, Kashmiri chiles, salt and turmeric. Scrape the bottom of the skillet to deglaze it, releasing any browned bits of onion and meat; this will incorporate a rich flavor into the sauce. Reduce the heat to medium-low, cover, and simmer the sauce, stirring occasionally, until some of the oil, now a deep vermilion-red color, starts to separate around the edges of the skillet and on the surface, 5 to 6 minutes.

4. Stir in the coconut milk, and return the chicken to the skillet. Cook, covered, stirring and basting occasionally, until the meat in the thickest parts of the chicken is no longer pink inside and the juices run clear, 18 to 20 minutes. Transfer the chicken to a serving platter.

5. Raise the heat to medium and simmer the sauce vigorously, uncovered, stirring occasionally, until the creamy, reddish-brown curry is gravy-thick, 5 to 8 minutes.

6. Pour the sauce over the chicken, and serve.

Tips:
-Bone-in pieces of chicken are commonly used in Indian curries. The marrow in the bone adds to the meat’s juicy succulence. If you wish, you can use boneless pieces, but do make sure to decrease the cooking time by at least 50 percent. Dark meat is always gamier-tasting than white; either one will work for this curry.

-For a sweeter-tasting sauce, use malt or cider vinegar instead of the distilled white variety.

-There is no need to grind the coriander and cumin seeds separately. Place them together in a spice grinder for a strongly aromatic blend. (I do, however, always recommend that my students grind them separately at first, so they can learn to recognize the difference between the two. One should be able to identify ground spices by smell alone-it’s a great way to get acquainted with them and to appreciate their subtleties.)

Pour 1/2 cup water into a blender jar, and then add the garlic. (Adding the water first will ensure a smoother grind.) Puree, scraping the inside of the jar as needed until it forms a smooth paste. Store the paste in a tightly sealed container in the refrigerator for up to 1 week. (I often divide the paste into smaller containers and freeze them for up to 1 month. Another option is to place 1-tablespoon portions in ice cube trays and freeze them; once they are frozen, pop them out and transfer them to freezer-safe self-sealed bags.)

Tip: Yes, you can spend the time and peel your own garlic cloves, but given the fact that your favorite grocery store carries whole peeled garlic cloves in plastic jars, right there in the refrigerated section next to the produce, wouldn’t you want to save some time? (And do I like the pre-minced garlic in jars that are so readily available? No. It usually sits in oil or vinegar, affecting the flavor.