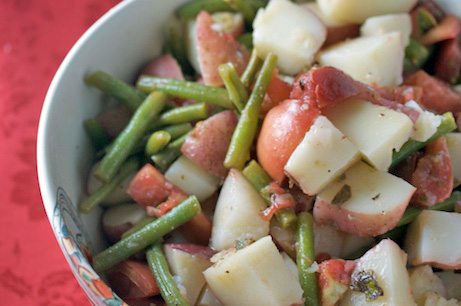 This is a salad that I learned to make from my father-in-law who spent his early childhood in Calabria, Italy. It’s fantastic when made with fresh tomatoes (I used some heirlooms from the farmers’ market) and lots of garlic. The oregano was from my garden. I guessed at the amounts – this was my first time making it, and I’m not sure it was quite as good as his… but still awesome!

Put potatoes in a large pot of water and bring to a boil. Cook until fork-tender, adding the green beans in during the last few minutes of cooking. Drain and rinse with cool water. Put in large bowl with tomatoes, garlic and oregano. Drizzle with a few tablespoons of oil and vinegar. Season with salt and pepper and refrigerate until ready to eat.