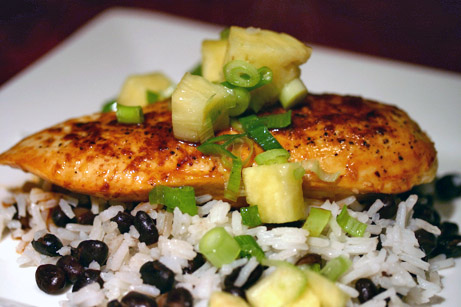 I live several states away from my mom, and I’m trying to get her into cooking more meals at home. As part of this “deal”, we decided to pick at least one recipe per week that we’ll both cook, that way we can talk about it and hopefully find new and great recipes. I think it might be easier on me since I like more types of food, but I’m hoping it’ll open her up to some different ingredients and cooking styles that she may or may not have tried otherwise. This week, she picked out this recipe. It turned out really good! The flavors work really nicely together. The only thing that was a little odd to us was that you just kind of toss green onions with pineapple to go on the side. I ended up mixing mine all together to get all of the yummy flavors at once. Yum!

Cook the rice according to the package directions.

Combine the vinegar, rum, jerk sauce, and ginger in a measuring cup or small bowl; set aside.

Pound the chicken to an even thickness. Season it with 1/2 teaspoon salt and 1/4 teaspoon pepper.

Heat the oil in a skillet over medium heat. Add the chicken and cook until browned, about 4 minutes per side. Remove from heat and add the vinegar mixture. Return the skillet to low heat and simmer until the chicken is cooked through, about 2 minutes.Divide the chicken and sauce among plates.

Stir the beans into the rice. In a medium bowl, combine the pineapple and scallions. Serve both with the chicken.

Tip: The chili peppers in jerk sauce shouldn’t overwhelm the other ingredients. Taste yours before adding it to a dish. If the sauce is too spicy, cut the amount you use in the recipe by half.
Yield