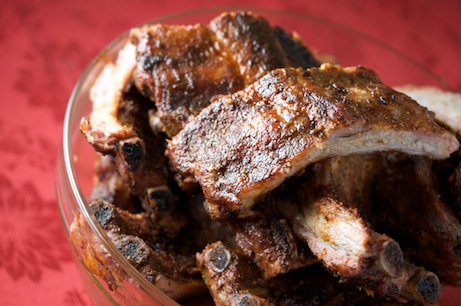 This recipe takes a lot of time, but it’s so worth it! I put the spice rub on the ribs when I woke up, and about 5 hours later, Dino fired up the grill with some mesquite wood chips. He ended up taking inspiration from this Mustard Sauce recipe – he took the leftover mop and added dark brown sugar, cayenne, melted butter and lemon juice. It was an awesome accompaniment to the spicy ribs. They were dubbed “the best ribs EVER” by everyone at the table. YUM!

I also made Cole Slaw and Deviled Eggs, and heated up some baked beans to round out the festivities. 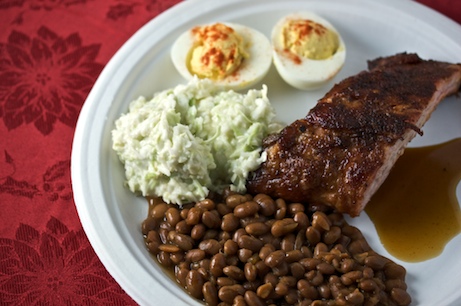 Editor’s note: The recipe and introductory text below are from The Barbecue! Bible 10th Anniversary Edition, by Steven Raichlen. To read more about Raichlen and barbecue, go to our feature The Best Barbecue in the U.S.A.

It never fails to amaze me how one simple idea can give birth to so many great regional variations. Consider ribs. The pork rib is one of the most perfect morsels ever to occupy a grill. The meat is generously marbled, which keeps it moist during prolonged cooking. As the fat melts, it crisps the meat fibers and bastes the meat naturally. The bones impart a rich meaty flavor (meat next to the bone always tastes best), while literally providing a physical support—a gnawable rack on which to cook the meat. Yet depending on whether you eat ribs in Birmingham or Kansas City, or Bangkok or Paris for that matter, you’ll get a completely different preparation.

I’ve always been partial to Memphis-style ribs. Memphians don’t mess around with a lot of sugary sauces. Instead, they favor dry rubs—full-flavored mixtures of paprika, black pepper, and cayenne, with just a touch of brown sugar for sweetness. The rub is massaged into the meat the night before grilling, and additional rub is sprinkled on the ribs at the end of cooking. This double application of spices creates incredible character and depth of flavor, while at the same time preserving the natural taste of the pork. Sometimes a vinegar and mustard based sauce—aptly called a mop sauce—is swabbed over the ribs (with said mop) during cooking; I’ve included one here, for you to use if you like.

You can choose any type of rib for this recipe: baby back ribs, long ends, short ends, rib tips—you name it. Cooking times are approximate. The ribs are done when the ends of the bones protrude and the meat is tender enough to pull apart with your fingers. I like my ribs served dry, in the style of Memphis’s legendary barbecue haunt, the Rendezvous. If you want to serve them with a sauce, you’ll find a number to choose from in this chapter.

Advance preparation
4 to 8 hours for marinating the ribs

1. Prepare the ribs and rub: Remove the thin, papery skin from the back of each rack of ribs by pulling it off in a sheet with your fingers, using the corner of a kitchen towel to gain a secure grip, or with pliers.

2. Combine the paprika, black pepper, brown sugar, salt, celery salt, cayenne, garlic powder, dry mustard, and cumin in a small bowl and whisk to mix. Rub two thirds of this mixture over the ribs on both sides, then transfer the ribs to a roasting pan. Cover and let cure, in the refrigerator, for 4 to 8 hours.

3. Prepare the mop sauce (if using): Mix together the cider vinegar, mustard, and salt in a bowl and set aside.

4. Set up the grill for indirect grilling and place a large drip pan in the center.

If using a gas grill, place all of the wood chips in the smoker box and preheat the grill to high; when smoke appears, reduce the heat to medium.

If using a charcoal grill, preheat it to medium.

5. When ready to cook, if using a charcoal grill, toss the wood chips on the coals. Brush and oil the grill grate. Arrange the ribs on the hot grate over the drip pan. Cover the grill and smoke cook the ribs for 1 hour.

6. When the ribs have cooked for an hour, uncover the grill and brush the ribs with the mop sauce (if using). Re-cover the grill and continue cooking the ribs until tender and almost done, 1/4 to 1/2 hour longer for baby back ribs, 1/2 to 1 hour longer for spare ribs. The ribs are done when the meat is very tender and has shrunk back from the ends of the bones. If using a charcoal grill, you’ll need to add 10 to 12 fresh coals to each side after 1 hour. Fifteen minutes before the ribs are done, season them with the remaining rub, sprinkling it on.

7. To serve, cut the racks in half or, for a plate-burying effect, just leave them whole.

We took pictures of the step-by-step process for this which you can find here.