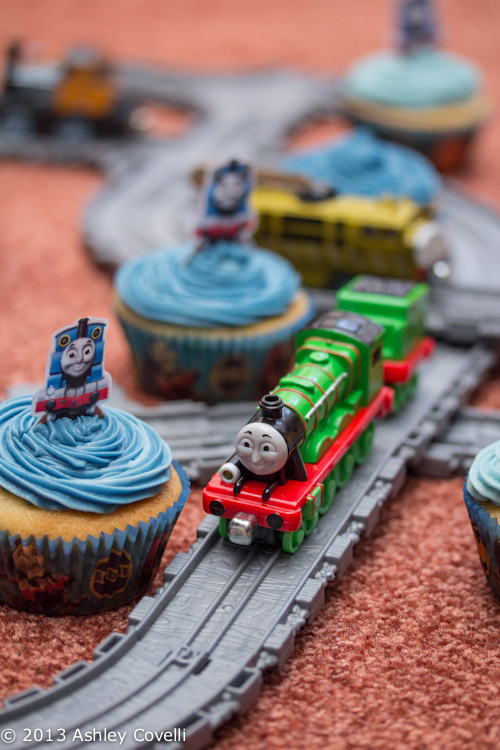 Over the weekend, we celebrated my son’s second birthday. My husband made me promise not to cook all of the food for the party, but I couldn’t resist adding just a few homemade items to the awesome spread that the caterers provided. One thing that I knew I had to make was another batch of these delightful cupcakes. I made them last year for his first birthday (in Elmo form!), and this year I adapted the colors and decorations to fit the Thomas the Train theme of his party. 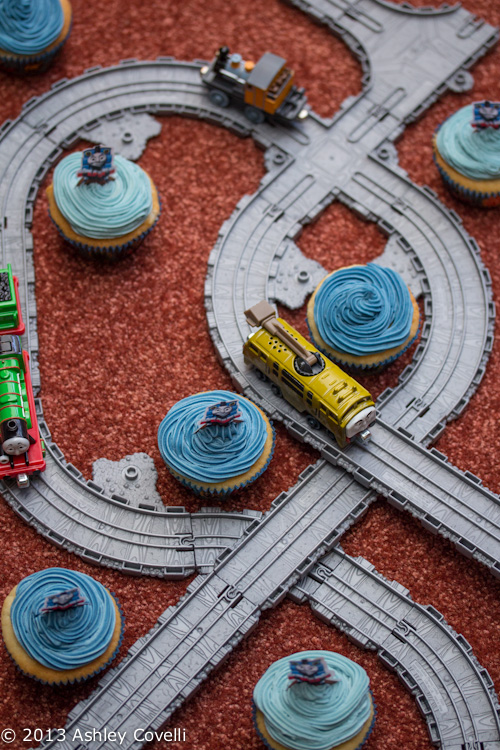 I used Thomas cupcake wrappers and picks, and tinted the buttercream two different shades of blue. I put some blue food coloring into the entire batch of frosting and after I used half of it, added more food coloring to make the rest of the cupcakes a darker blue. I piped it on this time around using a pastry bag with a star tip (I was lucky enough to get a free one from ProCook a while back, and it’s been a lot of fun to use!). 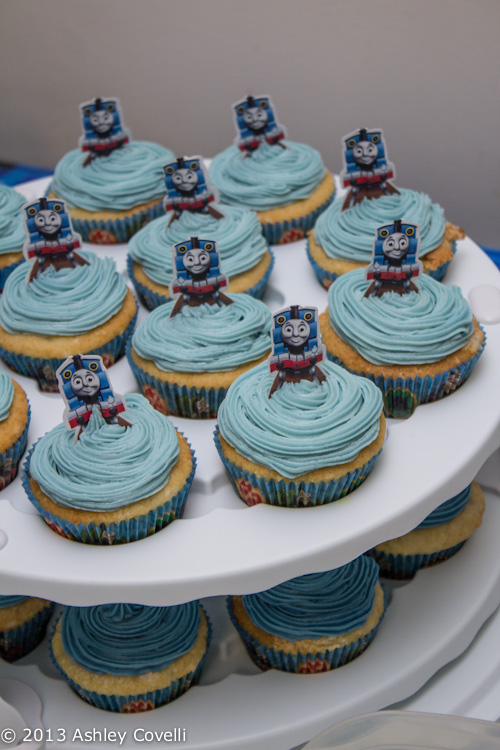 I doubled the below recipe and used an ice cream scoop to portion them out, and ended up with 42 cupcakes instead of 48. This cupcake recipe is so easy and delicious – I highly recommend it! The buttercream is the perfect accompaniment. The birthday boy absolutely loved them, and so did the guests at the party. 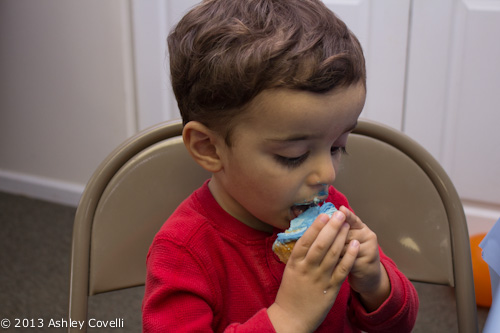 Amy Sedaris’s Vanilla Cupcakes
I Like You: Hospitality Under the Influence – Amy Sedaris

Put butter in mixer and beat at medium speed until somewhat smooth. Pour in sugar and beat well. Add 2 eggs. I like to crack the eggs on the side of the bowl while it is moving, which can be really stupid. I like to take chances. Yes, I have had to throw away my batter because I lost eggshells in the mix. Yes, it was a waste of food and yes, I know how expensive butter is, but what can I say? I’m a daredevil. Mix well. Add: vanilla, baking powder, salt, flour, and milk. Beat until it looks like it is supposed to and pour into individual baking cups, until they are about 2/3 full. Bake for 20 minutes or until golden brown. Should produce 24 cupcakes; I get 18 because I’m doing something wrong, although my cupcakes were voted second best in the city by New York Magazine.

Amy Sedaris’s Vanilla Buttercream Frosting
I Like You: Hospitality Under the Influence – Amy Sedaris

*Less than 1 teaspoon pure almond extract can be substituted.

In a bowl combine: one box of confectioners’ sugar, one stick of unsalted butter, one teaspoon of pure vanilla extract, and 1/4 cup of milk or light cream and beat for a while. Really whip it, don’t be afraid to get in there. I occasionally add food coloring and sometimes substitute pure almond extract for vanilla.
If you do choose to add pure almond extract instead of vanilla, you’re on your own. I don’t know the measurement for it, but I do know it’s less than the amount of vanilla you would add.