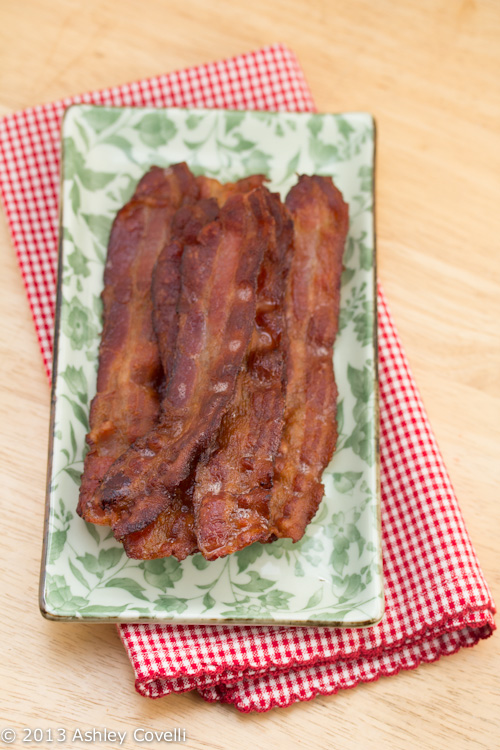 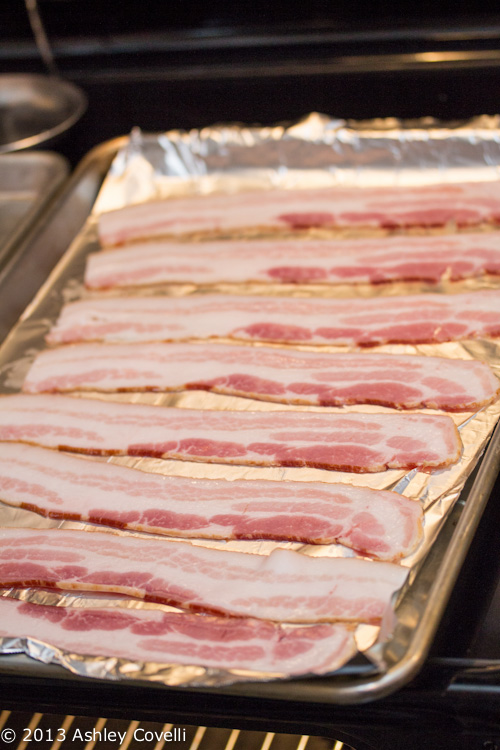 Along with the Spinach and Cheese Quiche this morning, I decided to finally try out making bacon in the oven. It sounded promising – just put it in a cold oven, turn it on and come back after a few minutes to perfectly crisp bacon without a big mess. And you know what? It totally delivered. So much so that I made 2 trays of it this morning, since I also needed bacon for a side dish for Father’s Day dinner. The bacon was nice and flat, and perfectly crispy. I used Applegate Farms Natural Uncured Sunday Bacon, and it was divine. The bacon grease did get under the foil a bit, but it wasn’t much of a hassle to clean up since all the solid bits that stuck were on the foil and not the pan. This will definitely be my go-to method for cooking bacon from now on!

1. Line a baking sheet with foil. This will make cleanup easier later.

2. Arrange bacon slices on the foil and place the baking sheet on the center rack of a cold oven. Close oven door. Turn oven on to 400°F. Walk away.

3. Come back 17 to 20 minutes later. As soon as the bacon is golden brown, but not excessively crisp, it’s done. The exact time will depend on the thickness of the bacon slices, and also on how quickly your oven reaches the target temperature.

4. Remove the pan from the oven. Transfer the bacon to another sheet pan lined with paper towels to absorb the fat. You can pour the liquid fat into a heat-resistant container to save for other uses. I like to pour it through a strainer lined with cheesecloth to filter out any crunchy bits.

Tips:
1. Don’t pre-heat the oven! Make sure the oven is cold when you put the bacon in.

2. Keep your eye on the bacon during the final few minutes of cooking to make sure that it doesn’t burn. Also, remove the cooked bacon from the hot pan right away. The heat from the pan and the hot bacon fat will continue cooking the bacon.

3. You can slightly undercook the bacon, then cool it and freeze it in a zipper bag. Then, to reheat, cook two slices in the microwave on medium power for 30 seconds or so.

Variation: Dredge bacon in flour or corn meal before baking.