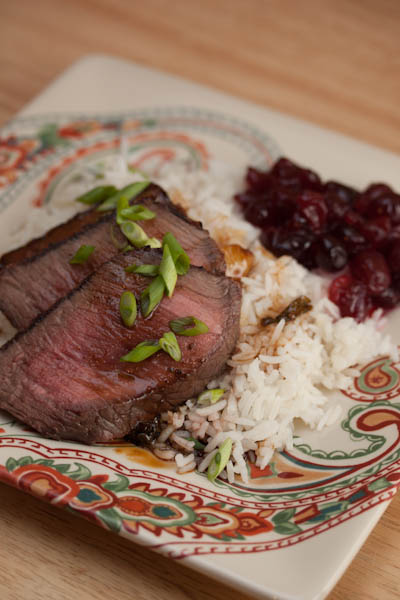 I had a piece of London broil in the freezer, and I thought this recipe looked quick and simple. It turned out great! It’s a quick marinade, and then you broil the meat, let it rest, reduce the marinade into a nice sauce, and dinner is ready! I had some leftover rice, so it was even quicker. I totally forgot the sesame seeds, but I’m sure it would have only made it better. I’ll definitely make this one again.

In a large skillet, stir together the soy sauce, sugar, and garlic until the sugar dissolves. Rinse the meat, pat it dry with a paper towel, and place it in the skillet, turning to coat. Let stand for 20 minutes, turning once more. Meanwhile, cook the rice according to the package directions.

Adjust oven rack to upper third of oven and turn on broiler. Transfer the meat to a rimmed baking sheet lined with foil. Reserve the marinade in the skillet. Sprinkle the meat with the pepper and broil, about 5 minutes per side for medium-rare. Transfer to a cutting board and let sit for 5 minutes before slicing thinly. Place the skillet containing the marinade over medium-high heat and bring to a boil. Add the scallions, reduce heat to medium, and cook for 2 minutes. Divide the rice among 4 plates, arrange the meat on top, spoon the scallions and sauce over it, and sprinkle with the sesame seeds.

Tip: Boiling the leftover marinade before using it as a sauce is necessary to kill any bacteria from the raw meat.