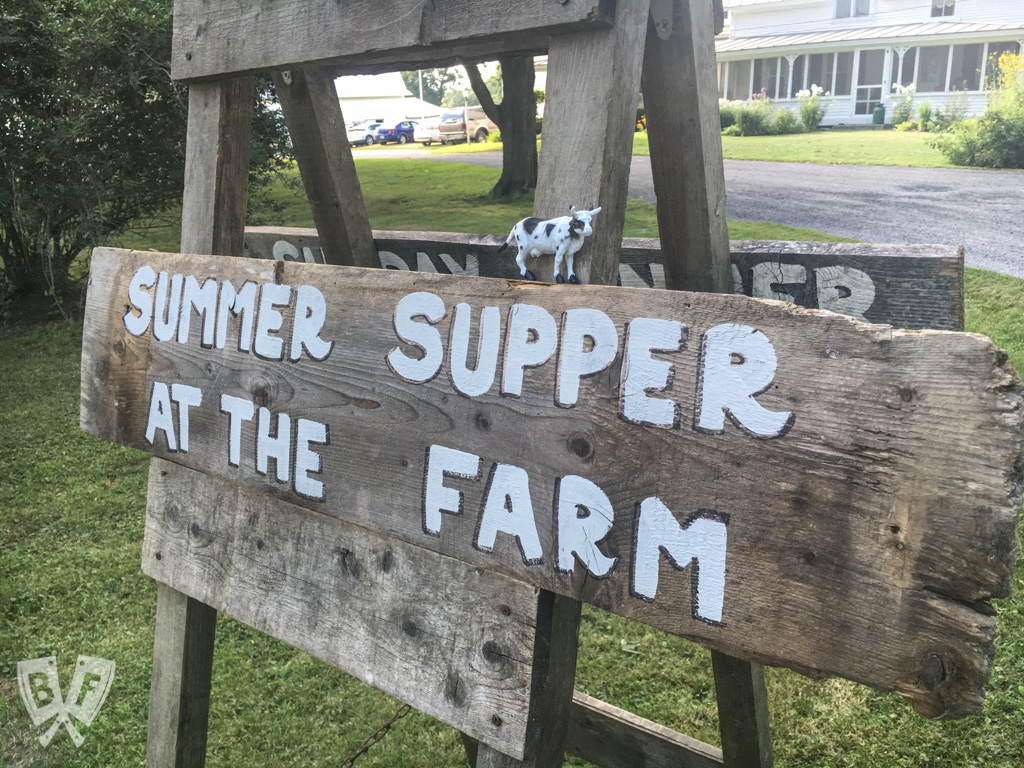 A big, big thank you to Stonyfield for taking me on this incredible adventure in Vermont. As always, all opinions are 100% my own.

Today marks the first day of autumn, but my mind is still stuck on summer.

More specifically, my mind is stuck on Vermont.

I’ve jokingly told people that Vermont is my “spirit animal” many times, but this trip really solidified that it’s no joke. It’s such a beautiful, peaceful place full of friendly people, lush green mountains, and the happiest cows I ever did see. 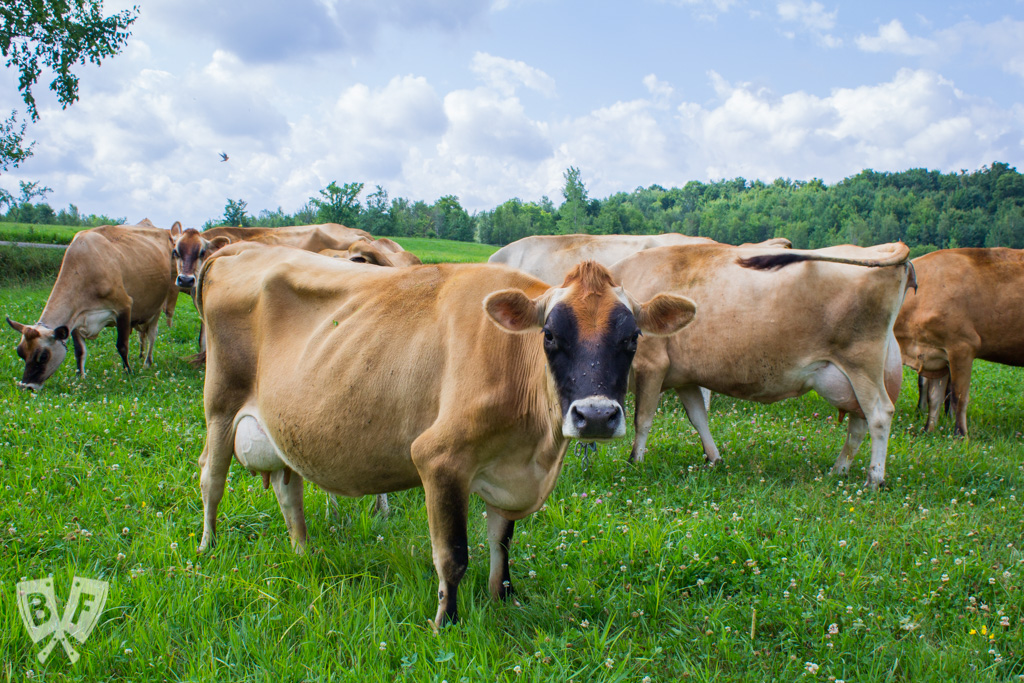 Back in August, Stonyfield invited a fabulous mix of 13 food, travel, family, and healthy living bloggers from all over the U.S. to be part of their 2016 Farm Tour.

We all piled into a bus and hit up 3 working dairy farms scattered around Vermont over 2 days to learn about what goes into producing milk (and yogurt!).

I’ve known many of these ladies online for quite some time now, so it was great to put faces with names/blogs. 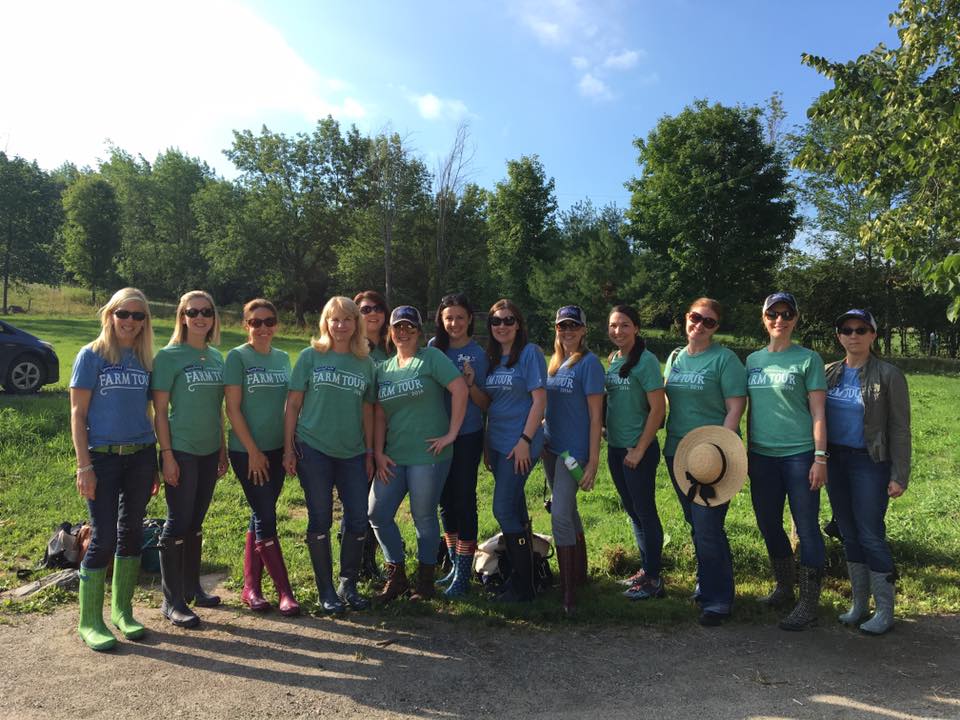 My first order of business after arriving at the airport in Burlington (which, by the way, is the cutest ev-er) was to caffeinate! I’m a big coffee drinker, and while I did have some in the morning on the way in, I needed more. And when I saw that they had lattes made with local maple syrup, I was so down.

Iced maple latte in hand, I hopped in a car with a few of the other bloggers (including Dianna, who just happened to be sitting directly in front of me on the flight over, but we didn’t realize until we landed!) to check out our digs for the weekend.

We stayed at the breathtakingly beautiful Stoweflake Mountain Resort & Spa in Stowe, Vermont. Aside from the fact that I got a king size bed all to myself (pure heaven!), the grounds were just gorgeous! The courtyard totally reminded me of Alice in Wonderland (another favorite of mine), and I made sure to spend some time on the big wooden swing, soaking it all in during the little bit of downtime that we had.

After we got settled, a few of us decided to take a walk to find lunch. We found a really fun place, right down the road from the hotel (and right off the Stowe Recreation Path), called The Blue Donkey.

Aside from getting a kick (pun not intended, but I’m gonna roll with it) out of the name, we were happy to find somewhere with outdoor seating and a menu with options everyone could enjoy. It smelled incredible as we walked up, and we couldn’t wait to dive in!

The food was so, so good. I ordered The Classic Blue Donkey (choice of cheese, lettuce, tomato, onion and pickles) with sweet potato fries. I love that they showcase local, seasonal products on their menu. It was one of the juiciest, most delicious burgers I’ve eaten.

And I’m also a fan of the sense of humor around the restaurant like the tip jar (pictured below), and the fact that their ice machine said, “Ice Ice Baby”.

What can I say? I love a good pun.

After lunch, we met up with the rest of the bloggers and our 2 Stonyfield guides/soul sisters, Liza and Máiréad. We all made our way to the bus for a scenic drive out to Kimball Brook Farm in North Ferrisburgh, VT, where we were invited to attend one of their Summer Supper at the Farm events.

Now this type of event is right up my alley. The farm welcomes the entire community to come for an evening of good food, live music, hay rides and more. People can come in, pay for food (either a la carte or as a meal), and enjoy being outdoors in good company. Plus they can meander around the farm property to see the cows and the dairy operation in full swing.

There were so many locals there, and everyone was having a great time. And although it was my first time away from my family for more than a night, it was really nice to be surrounded by so many happy families, enjoying a beautiful summer evening on the farm.

The band that was playing did some of the same songs that my husband’s cover band plays, too, so it was almost like my family were there with me. Everything about the farm really made me feel at ease. 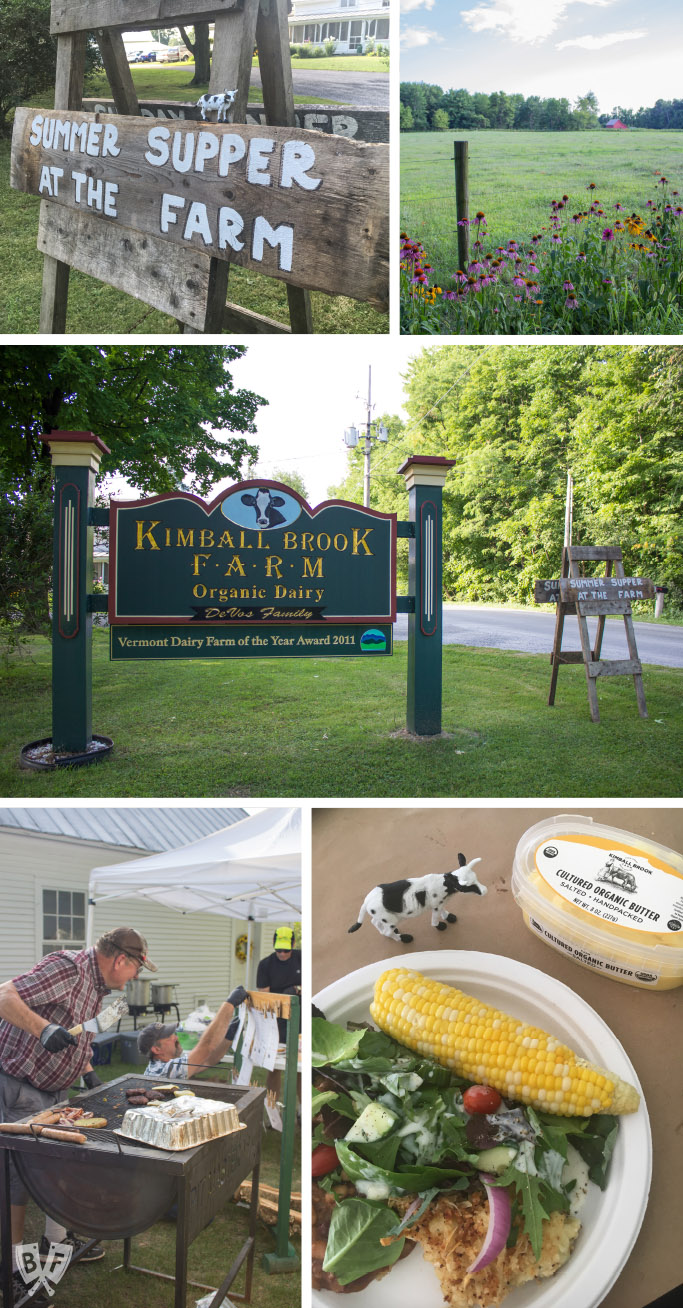 Since we had a heavy lunch, I decided to go for what I dubbed a “side dish sampler”, choosing one of each of the side dish offerings in lieu of a main dish with sides.

My sampler consisted of organic homestyle baked beans, sugar snap mac n cheese, organic salad, and corn on the cob. Being originally from Indiana, I was psyched to have such amazingly fresh, sweet corn. It was phenomenal! And the beans were meaty, sweet, and tangy. Just how I like ’em!

But I have to say, the farm’s own salted butter totally stole the show. It was so good that I ate some of it right off the knife and debated pocketing the remainder of the container. It was glorious!

After eating, we headed over to the milking parlor just in time to watch the cows get milked. 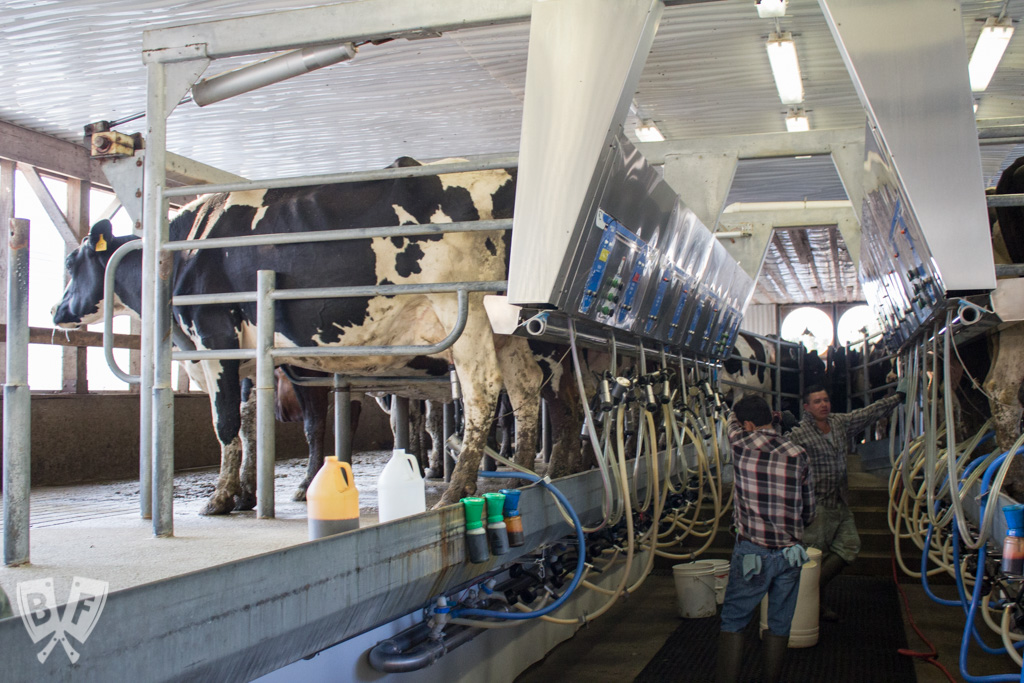 The DeVos family purchased the farm in 1967. They started with 50 cows and in 2001, John De Vos III (JD) and his wife Cheryl took over and expanded the herd from 80 to 200. They also added a milking parlor.

In 2003, the farm started the transition to organic. Kimball Brook Farm became one of the largest certified organic dairy operations in the State of Vermont.

They’ve since opened a creamery that produces the butter I mentioned earlier, as well as several varieties of milk (the chocolate is heavenly!!), cream, half and half, iced teas and more. 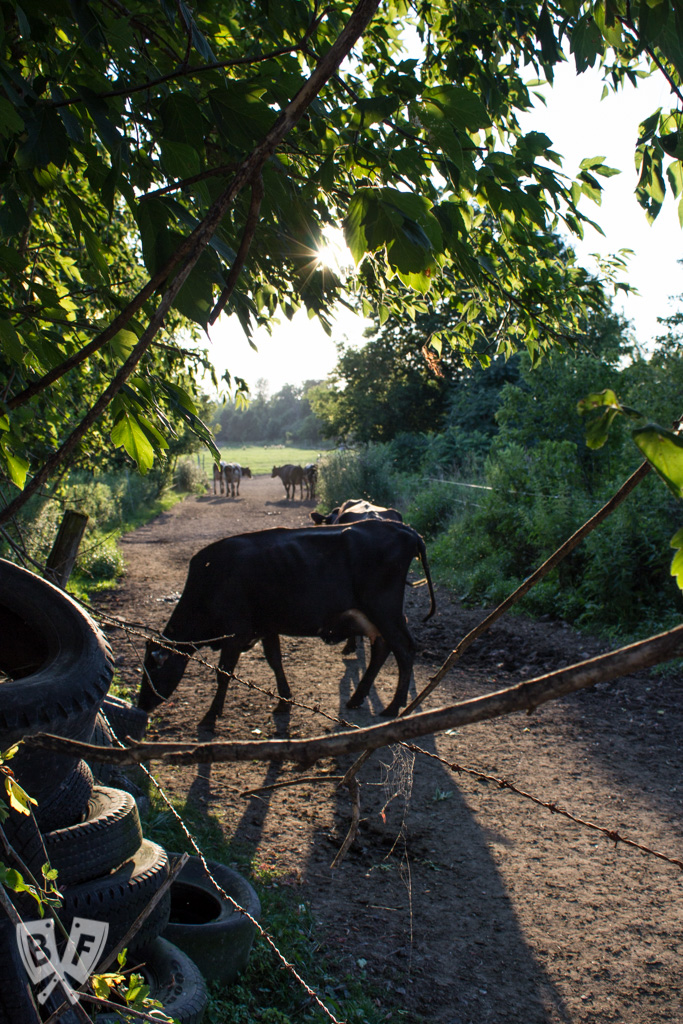 As we were heading back to the bus, we saw the cows heading back out to pasture as the sun was setting in the distance.

I couldn’t get over how beautiful this farm was. There was such a great sense of community and pride there that just gave me the warm fuzzies. 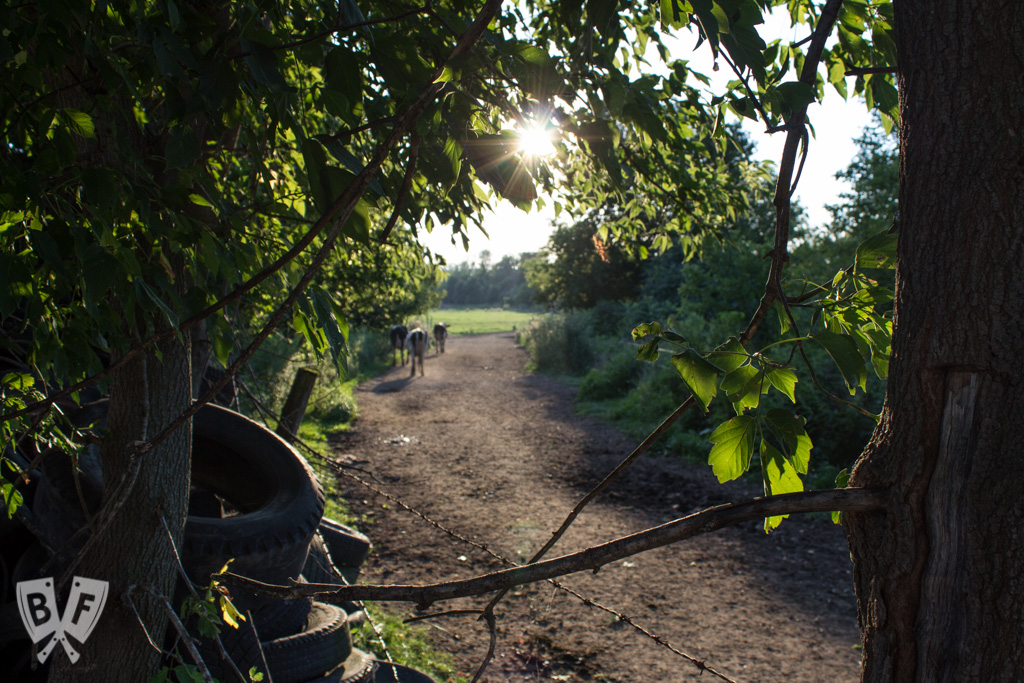 We made a quick pit stop at the Ben & Jerry’s Factory/Ice Cream Shop in Waterbury, VT on the way back. This is the mothership for all Ben & Jerry’s fans, and everyone was excited to grab a scoop.

I was still really full from dinner, and I had been to the factory a few years ago, so I decided to take a walk up to the Flavor Graveyard instead. I wanted to check out all the tombstones of the dearly departed ice cream flavors that the company used to produce.

Moment of silence for Fossil Fuel, which was much loved in the Covelli household. 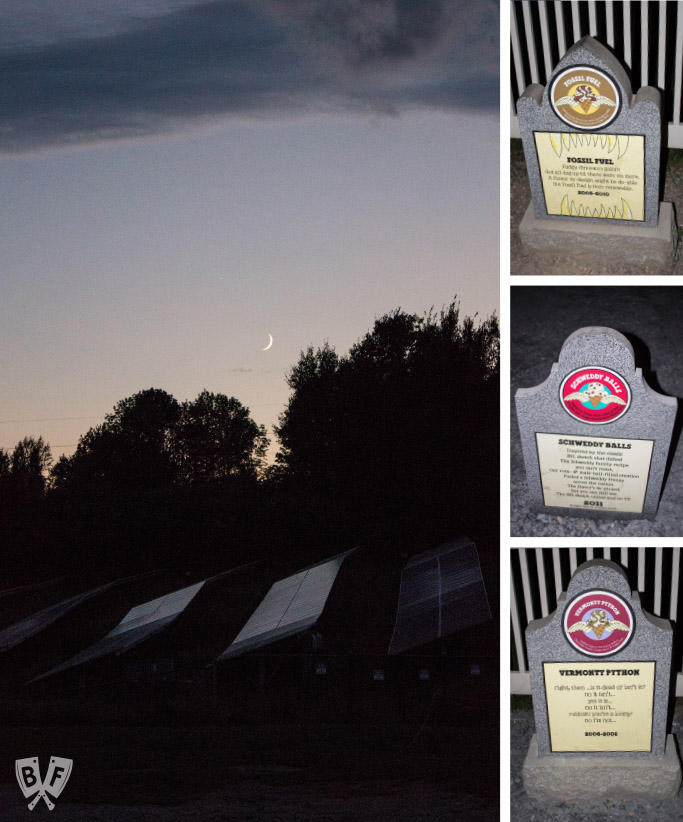 The crescent moon was absolutely gorgeous over the field of solar panels that Ben & Jerry’s has on their property. It was a perfect ending to a wonderful first day in Vermont!

Nothing like a day full of delicious food, friendly people, good vibes, and happy cows!

Stay tuned for the next installment to read about more of the dairy farms I visited in Vermont with the 2016 Stonyfield Farm Tour. I promise there will be lots of adorable cows and lush pastures to swoon over!