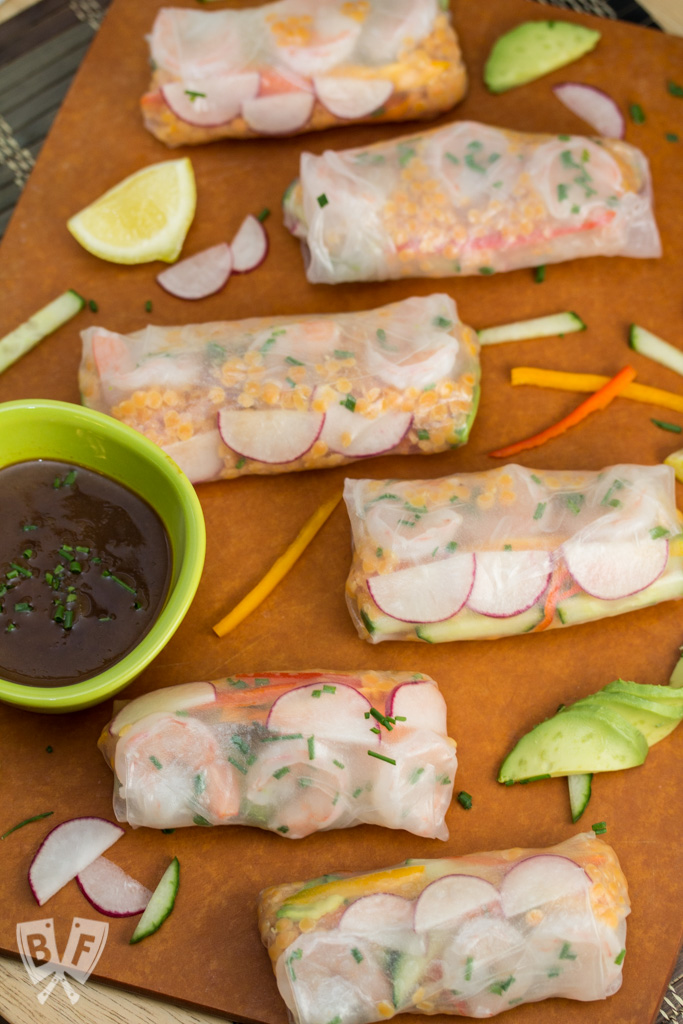 This installment of Big Flavors from a Mystery Basket features a vibrant, Asian-inspired dish that was a big hit at the dinner table!

We’ve been having a lot of fun with the Mystery Basket meals in my house. It’s a fun way to deal with making dinner when I’m feeling uninspired, and my husband and son love trying to stump me with their ingredient selections.

This time around, my challenge was to use Mirin, rice paper, canned diagonally cut green beans and dried split red lentils.

I knew I wanted to use the rice paper to make summer rolls, and figured the lentils would be a fun substitution for the traditional rice noodles.

So I gathered up a bunch of colorful veggies from the fridge and some shrimp from the freezer and got to work!

First things first – I knew I wanted to have chilled shrimp and lentils to go inside, so I cooked those first.

I used a similar cooking method to when I made my Killer Shrimp Cocktail to add flavor to the shrimp, which worked out well. 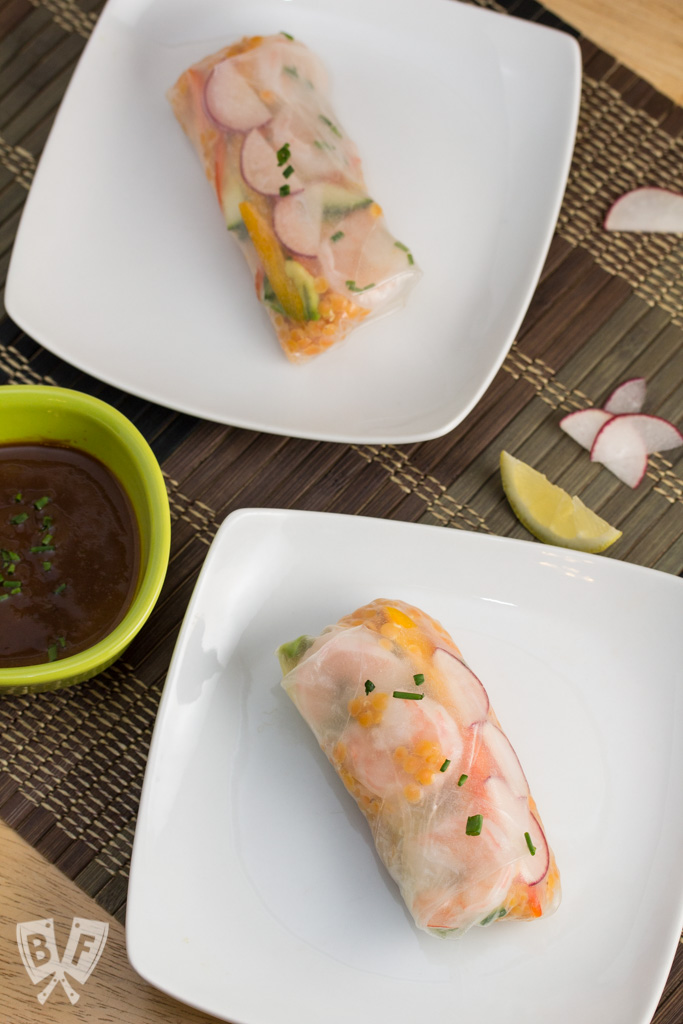 The canned green beans were the ingredient that I found to be the trickiest, so I really wanted to step up and use them in more than one way. I can’t have the judges accusing me of taking the easy way out, right? Ha!

I used some of the liquid from the can in the vinaigrette that I tossed the cooked lentils in, and put some in the dipping sauce, along with some mashed up green beans.

It worked out surprisingly well! 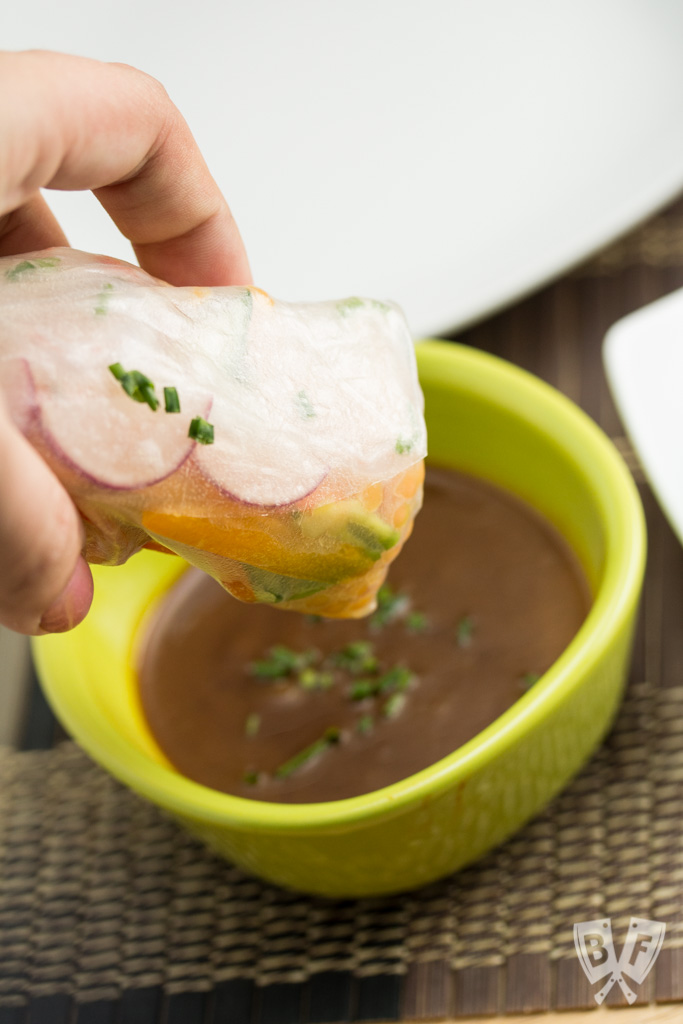 I had some mini bell peppers in the fridge, and I knew that would add a great pop of color to the dish.

You can’t go wrong piling up crisp, colorful veggies in spring rolls, so I really loaded these up.

These were a big hit with my family. Colorful food just tastes better, right? And now that I’ve used lentils as summer roll filling, I think it might be fun to experiment with lots of other mix-ins! 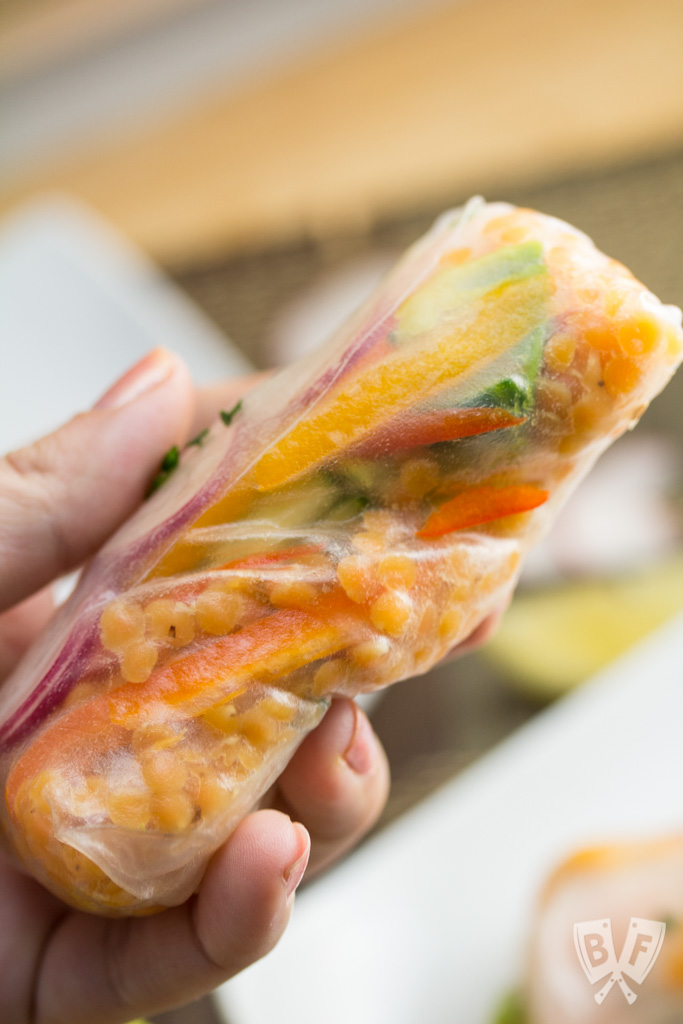 I only made 6 of these summer rolls, but there was plenty of filling to make more. I ended up having leftovers in salad form without the rice paper wrappers, and it was really tasty!

This installment of Big Flavors from a Mystery Basket features a vibrant, Asian-inspired dish that was a big hit at the dinner table!