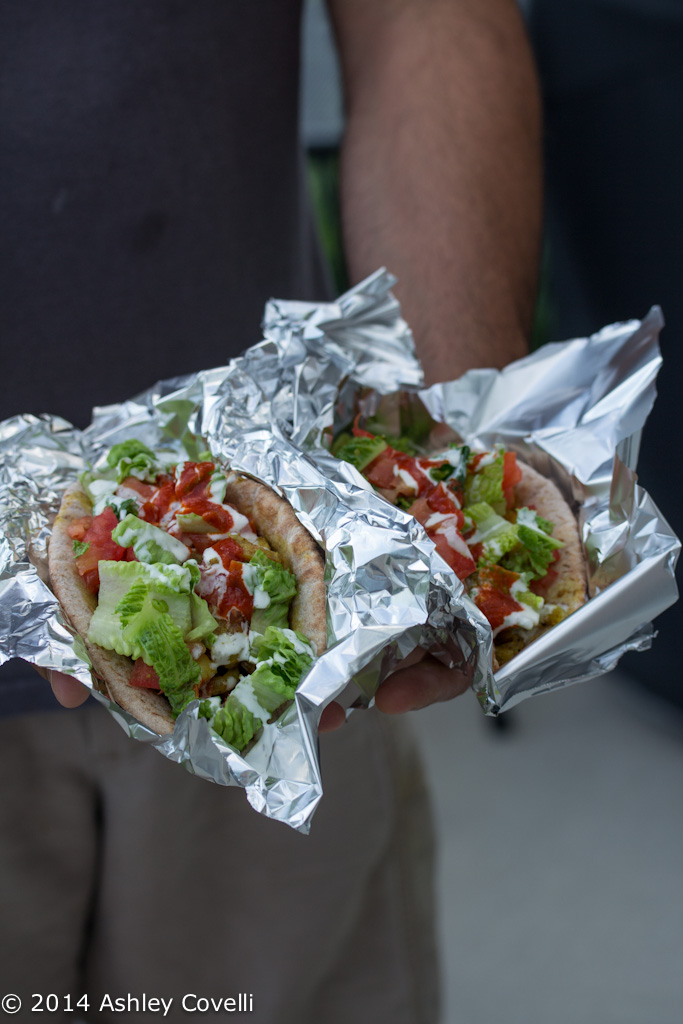 This is Dino’s revamped version of his favorite NYC street cart food. The meat was absolutely delicious, and the 2 sauces are the perfect accompaniment (extra, extra, extra white sauce!).

He made this for our Supper Club‘s Street Food night back in July, and it was a huge hit!

Rafiqi’s Delicious Food carts are numerous and abundant in NYC. The delicious odor of garlic and middle-eastern herbs permeated my afternoon commute one day back in 2004 and I’ve been a Rafiqi’s addict ever since.

Rafiqi’s chicken is spicy, it’s tender, it’s packed with flavor, and best of all- it tastes exactly like that amazing smell which drew me in- enticing me to wait on a very long line on a scorching, muggy day back in 2004.

I had a rather successful attempt at recreating the chicken on a pita back in 2006, however, the times I’ve tried since then didn’t work out so well. While the chicken was yummy, it didn’t have the depth of flavor you get at Rafiqi’s. I nailed the white sauce though, and that is the cornerstone of the meal!

Based on: Chicken and Rice NYC Street Meat Style by Eric Rhee and Michelle Won

Rafiqi’s Delicious Food carts are numerous and abundant in NYC. The delicious odor of garlic and Middle-Eastern herbs permeated my afternoon commute one day back in 2004 and I’ve been a Rafiqi’s addict ever since.