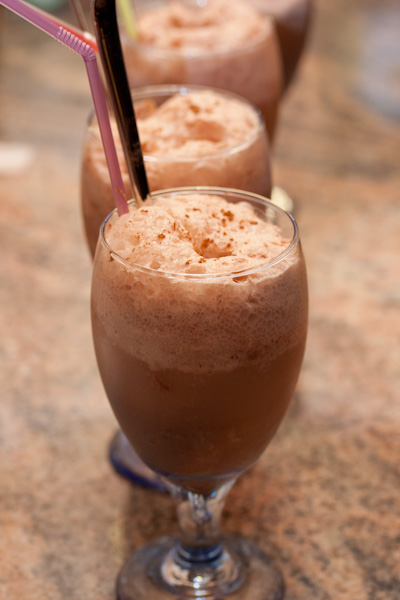 I made the mocha ice cream ahead of time and brought it with me so we could have a nice, cool dessert beverage to finish off the evening. These were a big hit, although I ran into some snags with the prep. I’m not sure if it was the humidity or what, but I couldn’t get the cream to peak. It was just a mess. And the chocolate (I used dark) was still kind of gritty in the final product. It was fun, though, and it was a great way to end the meal. It was a nice spin on a traditional root beer float, and the Vietnamese cinnamon really does make a difference. I’ve been hooked on that stuff for years.

Cinnamon is known as a sweet spice, but it can have a pungent bite. Vietnamese cinnamon, also known as Saigon cinnamon, is an especially fragrant variety, and its taste is sharper than that of regular cinnamon. It is worth seeking out.

1. In a glass measuring cup, pour the boiling water over the espresso. Cover the measuring cup with a small plate and let steep for 10 minutes. Strain the espresso through a paper filter into a small saucepan.

2. Whisk 1/4 cup of the sugar and 1 teaspoon of the cinnamon into the espresso and bring to a boil. Reduce the heat to moderate and simmer for 1 minute. Remove the saucepan from the heat, add the chocolate and, using a wooden spoon, stir until smooth. Using a rubber spatula, scrape the mocha mixture into a small bowl and let cool to room temperature, stirring a few times.

4. Using a medium ice cream scoop, add 3 or 4 small scoops of the frozen cream to tall soda glasses. Add club soda and sprinkle cinnamon over the top. Serve at once with a straw and a long-handled spoon.

Make Ahead: The mocha cream can be frozen for up to 2 days. Let it stand at room temperature for about 10 minutes before scooping.