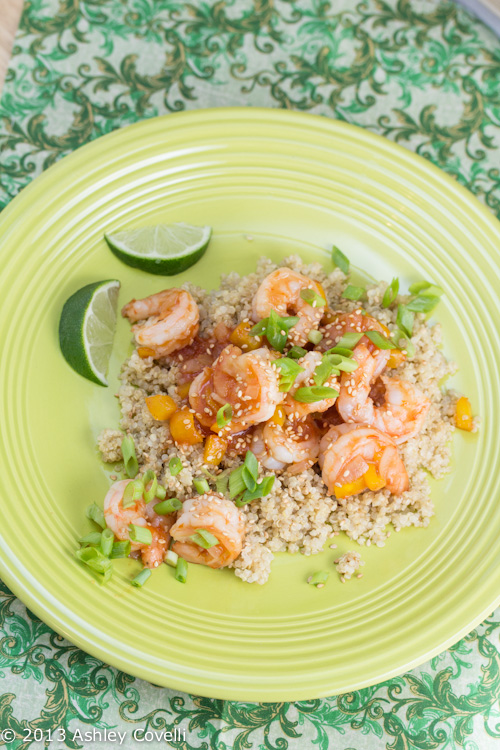 I had some chili sauce leftover from when I made Slow-Cooker Beef Short Ribs last week. I reached out to some friends to see if anyone had suggestions for using a partial bottle, and one of them told me that she had taken chili sauce, soy sauce and apricot jam and poured it over shrimp and cooked it all together for dinner one night for an Asian spin on shrimp. I thought that sounded awesome, and I had all of those things on hand! So I took that idea and ran with it, adding some garlic, onion, ginger and bell pepper and served it over quinoa that I made in the rice cooker. It turned out really tasty! The sauce was thick and sweet, and the shrimp were perfectly cooked. I like using quinoa instead of rice now and then, and it went really well with the shrimp.

Heat oil in a large, non-stick skillet over moderate heat. Add garlic, ginger, pepper and onion and sauté until the veggies are softened. Add shrimp and stir. While the shrimp are cooking, mix chili sauce, soy sauce, apricot preserves and lime juice in a small bowl. When the shrimp are almost cooked through, add in the sauce mixture and stir. Allow the shrimp to finish cooking and the sauce to thicken up and remove from heat. Serve over quinoa or rice, with extra lime wedges, chopped green onion and toasted sesame seeds for garnish.