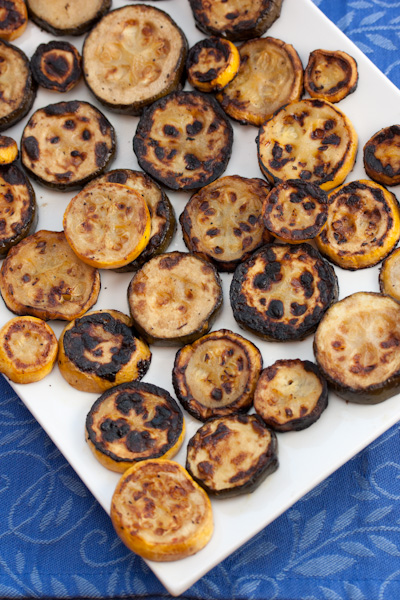 We were at a birthday party a few weeks ago, and the birthday boy was working the grill. One of the dishes was something so easy and delicious that I just had to make it at home! His wife marinated sliced zucchini in Italian dressing and they grilled them a few hours later. They were so flavorful! So we bought a bottle on roasted garlic Italian dressing and poured it into a bag with sliced zucchini in the morning. Dino grilled them and they were scrumptious! They’re tangy and the charred bits are really exceptional. I forgot to slice them lengthwise instead of in coins, which makes them easier to flip on the grill (and they won’t fall through the grill grates as easily). We used a vegetable pan on the grill to hold them so they wouldn’t fall through. These were SO good, I’ll definitely make them again!

As a side note, I was standing up on a chair to take this aerial shot of this dish, and when Dino saw it, he said I’m now banned from doing things like that until after the baby is here. It’s so strange to have your center of gravity shift, and it’s not really noticeable since it happens so subtly. So it’s good that he’s looking out for me, but I am kind of bummed that I won’t be able to take shots like that as easily for a while now. He’s gonna be a good daddy 🙂