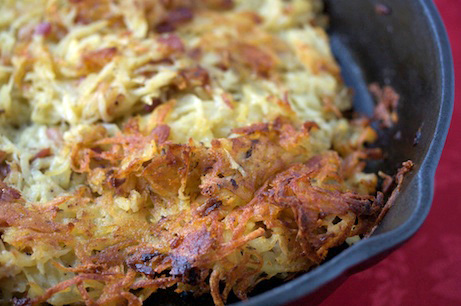 Dino made these with breakfast, and they turned out really tasty, but he had a few problems with the directions. You’re supposed to fry the potatoes on one side with the skillet still on the heat, and then flip it and bake it. We watched the episode where Tyler made these, but it was a while ago, so it wasn’t fresh in his mind. He also may have used too many potatoes. So it wasn’t as crispy as it should have been, and it took much longer to cook. But we’re going to try them again sometime, as the parts that did get crispy were awesome!

Peel potatoes and wash. Use a mandolin, or food processor with the grater attachment to finely shred potatoes. Place in a kitchen towel and squeeze dry.

Take a 9-inch oven proof skillet and add bacon and sliced shallots. Set over medium heat and render fat, 4 to 5 minutes. Shallots will caramelize. Using a slotted spoon, remove the bacon and shallots and put in a large mixing bowl (reserve the bacon fat and pan) with potato slices, egg white, green onions, and thyme leaves and season well with salt and pepper. Toss to combine. Spoon mixture into the hot pan with the bacon fat. Pack it in well pressing down with a large spoon to compress the mixture a little. Drizzle the top with some extra-virgin olive oil and season with salt and pepper. When it starts to get golden brown and crispy around the edges flip the hash brown over and pop into the oven to bake for 15 minutes. Remove from oven and allow to cool slightly before running a knife around the edges and then inverting the potato onto a cutting board. Slice into wedges, garnish with chopped flat leaf parsley and serve.