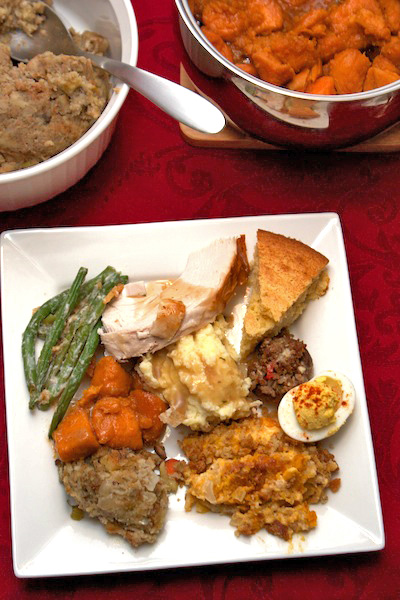 Last year was the first year that we hosted Thanksgiving at our house, and it was a big hit! My dad and his wife were in town – it was the first Thanksgiving we’ve spent with them in years – and as soon as they finished eating, they said that they were going to definitely travel to NY again for Thanksgiving 2011. Success! So my dad was pretty surprised when I called him a few weeks ago to tell him that I wasn’t sure if I was going to feel like cooking Thanksgiving dinner this year. I told him that I figured I’d be too busy to cook, because I’m due to have a baby the day before Thanksgiving 🙂

Dino and I are thrilled – it’s our first child (shh…don’t tell our cat, Jinx, she’s gonna be SO jealous!) and we couldn’t think of something to be more thankful for around Thanksgiving.

Now that I’m in my 2nd trimester, hopefully I’ll be getting my energy (and appetite!) back and will be in the kitchen more often. It’s been killing me that I haven’t wanted or been able to cook for the last few weeks. Dino has been missing it, too, but he’s been great and has been cooking more often (and dealing with take out more often than he’d like to). Thanks for sticking with me through the slow posting, and hopefully I’ll have lots of good things to post for the next few months…and then on to trying to make homemade baby food! 😉