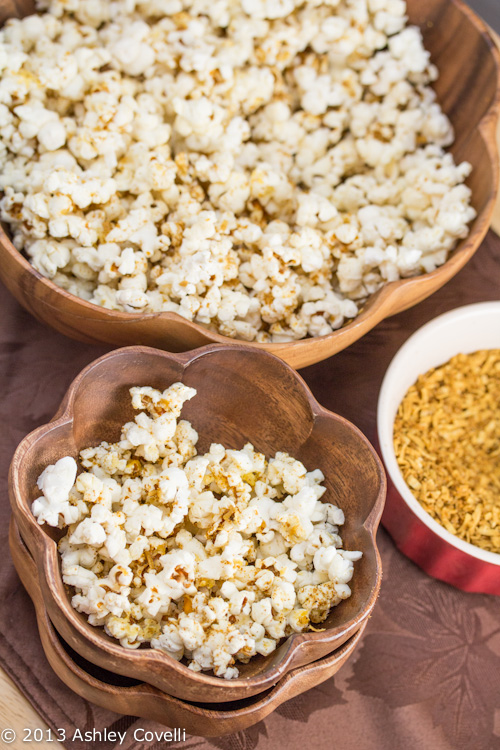 Since I had some of the Bollywood Coconut Curry Popcorn Seasoning that I made for Joanne leftover for myself, I decided to give making popcorn on the stovetop a shot. I searched online to learn how to pop popcorn kernels, and came across a great post over on the Recipe Girl site. I only used 1/2 cup of popcorn kernels, and used probably 3 tablespoons of oil. It was a lot of fun. Our cat, Jinx, was seriously interested in seeing all of the popping action. I did add some salt to the kernels, but probably shouldn’t have, since the seasoning was salty enough. I also realized that I goofed and didn’t pulverize the coconut before adding the other spices when I made the seasoning mix, so most of the coconut sank to the bottom. It was still really tasty, though, and very different from “normal” popcorn seasonings.

Yield: Roughly 24 cups (6 servings)
Prep Time: 10 min Cook Time: 10 min
This method turns out popcorn that is popped… all of it! And it’s so much better than microwave.

Directions:
1. Take out a pot with a large surface area (one that has a matching lid). A 5-inch deep, 9-inches across pot is perfect for 1 cup of popcorn.

2. Pour in the oil and then add the popcorn kernels. Sprinkle in a bit of sea salt, if desired. Shake the pan around to evenly distribute the kernels and coat them with oil. The pan should be big enough so that the kernels are not over-crowded and/or piled on top of each other.

4. Toss popcorn with melted butter and/or other seasonings, and serve immediately.