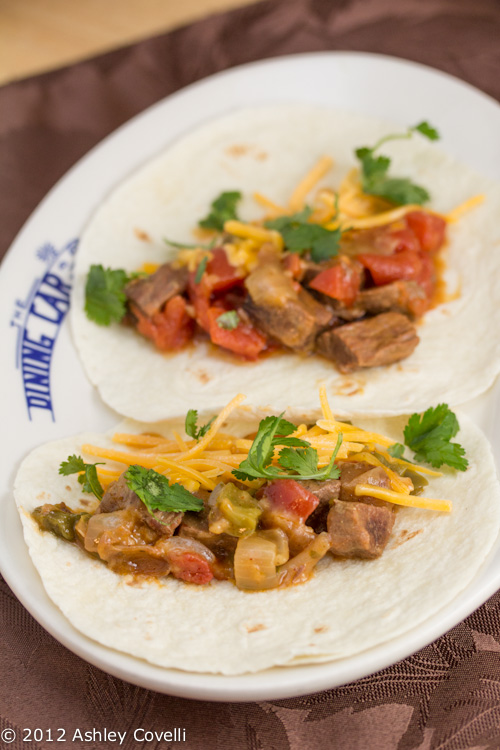 Woohoo! We have another all-star slow-cooker recipe on our hands! This was really labor intensive to put together, but it was oh so very worth it. I usually like slow-cooker recipes where you can just dump the ingredients into the slow cooker, turn it on, and go about your day. This one takes a lot of prep time…browning meat, sautéing veggies, thickening a spiced sauce…but it’s all about the layers of flavor here. I couldn’t find a piece of organic chuck or bottom round, so I used a piece of top round London broil. I also only used about half the amount of meat that it called for, because I didn’t need to have that much meat for just my husband and I. I don’t know how much of a difference that would have made in the whole recipe – I just had a lot of extra liquid, so I used a slotted spoon to serve the meat/veggies. The cheese and cilantro absolutely make these tacos complete, so don’t skip out on that part. This almost knocked out our favorite Slow-Cooker French Dips for the number one slow-cooker recipe we’ve had, but not quite. I will most definitely be making these again. Yum!

Beef simmered with garlic and peppers in a thick tomato sauce makes for a warm and satisfying dinner. A slow cooker turns a less expensive cut of meat into a flavorful stew. Serve it in flour tortillas or spoon over rice.

Season beef with salt and pepper. In a large skillet, heat 2 teaspoons oil over high. In two batches, cook beef until browned on all sides, 5 minutes per batch (add 2 teaspoons more oil for second batch). Transfer to a 5- to 6-quart slow cooker.

In same skillet, cook 2 teaspoons oil, onion, bell pepper, jalapeno, and garlic over medium, stirring and scraping up browned bits with a wooden spoon, until vegetables are tender, 5 minutes. Add cumin, chili powder, oregano, and flour and cook 1 minute. Slowly pour broth into skillet, stirring until liquid is smooth. Simmer 2 minutes, then transfer mixture to slow cooker, along with tomatoes and bay leaves. Season to taste with salt and pepper and stir to combine. Cover and cook on high 6 hours. Serve in tortillas with cheese and cilantro.

Cook’s Note: Refrigerate cooled mixture in an airtight container, up to 3 days.