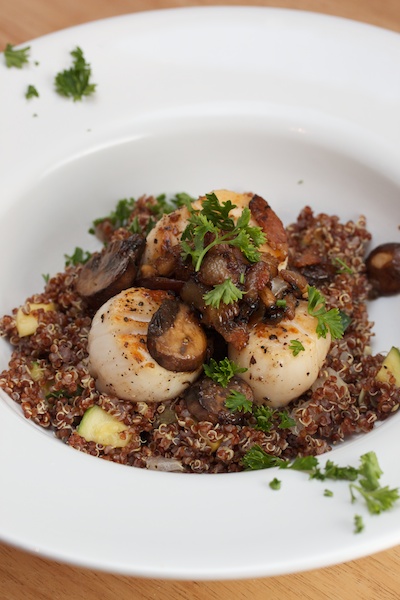 I felt inspired to make something with scallops and quinoa, so I took a trip to Whole Foods and picked them up, along with some zucchini and a package of mixed mushrooms. When I got home from work, Dino showed me a gift that a coworker (and amazing artist) gave us: 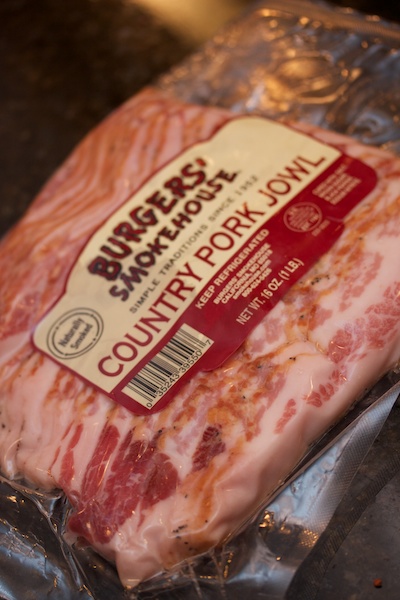 Wow. Pork jowl that was smoked to perfection and cut like bacon. It’s a new ingredient to us – it’s meat from the jaw/neck area, and we’ve heard raving reviews about it. How could we not use this stuff right away?! So I asked him if he wanted to collaborate on a dish with me. This is what we came up with. 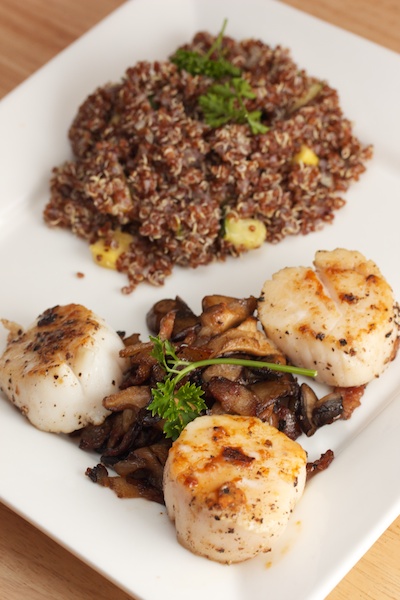 It was my first time cooking quinoa, and it was incredibly easy. 1 part quinoa to 2 parts water, bring to a boil, then cover it and lower the heat until all of the water is absorbed. While that was cooking, I sautéed diced green and yellow zucchini, a few sprigs of thyme and a chopped shallot in some olive oil with salt and pepper. Once they were tender, I put them on a plate until the quinoa was ready, and then I mixed them together.

Dino cut 3 strips of pork jowl into lardons and I sautéed them with another chopped shallot in the same pan I used for the zucchini. Once the pork was getting a lot of color, I added a package of mixed mushrooms (baby bella, shiitake and oyster) and let them cook down. We added a shot of bourbon and let it cook out, and then pushed them off to the side of the pan. I patted the scallops dry and seasoned them lightly with salt and pepper and set them down in the leftover oil and pork fat (it wasn’t a lot of fat, maybe a teaspoon total). I seared them and let them cook a few minutes before flipping them to cook the other side. They were really big scallops, but I wanted to make sure that I didn’t overcook them. Once they were done, I removed them from the pan and added another shot of bourbon to the mushroom mixture, to deglaze the pan. I finished it off with about a tablespoon of butter, and dinner was ready!

This turned out really tasty. I envisioned it as one dish, but Dino prefers his scallops separate. So we both made our own plates and I took photos of both. Maybe a vote is in order – which way would you prefer to eat this dish?