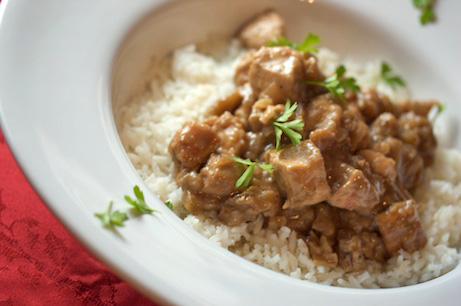 This recipe is really tasty and different from most things that we’ve tried before. This has a lot of walnuts in it, and we found ourselves picking around them toward the end because it was a bit too much (but hey, I picked a recipe with the words “walnut sauce” in the title). This is a sweet dish, and it’s perfect over basmati rice with some plain yogurt and pita (or lavash) on the side.

This dish is most probably Iranian in origin. It reached the kitchens in Baghdad from the cities of Najaf and Karabala, where a number of Iranians visit the holy shrines and often stay for a period of time. Also, there are numerous marriages between Iraqis and Iranians, which is another route for some of the Iranian dishes to reach the Iraqi kitchens.

There is a traditional Iraqi lyric, which we used to sing as children about a man called Hassoun who stole a cockerel and cooked Fasanjoon.

Heat a tablespoon of cooking oil in a saucepan. Add the chopped onion, cook until soft, and season with a little pepper.

Add the walnuts, pomegranate sauce, hot water, tahini paste, and salt, and bring to a boil.

Meanwhile, sprinkle a little flour over the pieces of chicken and fry until golden and crispy. Dry on paper towels and sprinkle with black pepper.

Add the chicken to the sauce and cook over medium heat for 20 minutes. Turn down the heat and simmer until the sauce is reduced and thickened (allow 5-8 minutes).

Note: Lamb can be used instead of chicken.