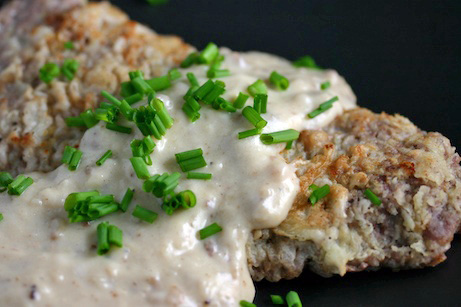 This is the second recipe I’ve tried for chicken fried steak. So far both have been awesome! I don’t think I got the oil quite hot enough this time, so it wasn’t as crispy as I’d like it to be. And I tried to make it look a little prettier by putting some chives on it, but… well… it wasn’t pretty. But it tasted great!

I think this comes from Texas, or at least the Texans claim to have invented it. It doesn’t really matter where it comes from though. The fact remains that it is totally delicious.

Place about 1/4 inch of oil or shortening into a large skillet and heat over medium heat.

Place the dredged cutlets into the heated oil and fry until golden brown on both sides, about 3 to 4 minutes per side. Remove to drain on a plate that has been lined with paper towels while you make the gravy.

Discard all but 2 tablespoons of the drippings from the pan. Stir in the flour and cook for about one minute, then slowly add the milk, stirring and scraping all the bits from the bottom of the pan. Cook over medium heat, stirring constantly until the gravy is thickened, for about 10 minutes or so. Taste and adjust the seasoning as necessary.

Serve the steaks with a little of the cream gravy spooned over, and pass any extra gravy at the table.