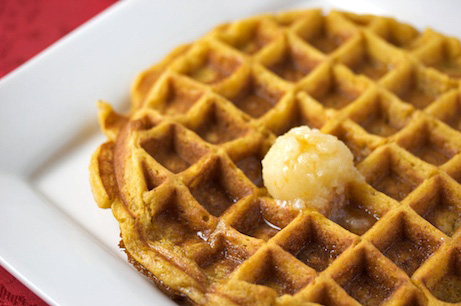 Dino made these for breakfast today, and we really liked them! He was inspired to use some of the leftover Orange-Honey Butter from the biscuits I made a few days ago. So he took the waffle part of a recipe and we topped them with the butter and some maple syrup. They were really tasty, and super fluffy. We prefer our waffles to have a bit of crispiness on the outside, and these didn’t. He cut the recipe in half, and it made 3 waffles – I have no idea what world they’re living in where the amount of batter in the full recipe makes 16 waffles!

From Buttermilk Pumpkin Waffles with Apples and Apple Cider Syrup.

Preheat oven to 200°. Preheat a waffle iron and coat it with cooking-oil spray. Ladle 1 cup batter (or amount directed by waffle-iron maker) onto hot iron, spreading with a spatula, and cook until nicely browned, about 5 minutes. Transfer waffle directly to oven rack. Repeat with remaining batter. Meanwhile, reheat apples and syrup.