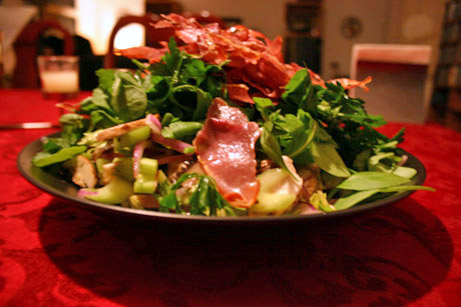 We were out of town for a week, so tonight was my first night back in my kitchen. I was a little frazzled because I had a million things to catch up on, so I didn’t realize until just now that I totally forgot to drizzle this salad with truffle oil. I think it would have helped (how could it not have?), but otherwise this salad was just OK. There was entirely too much lemon juice soaked into the mushrooms. I had 2 large lemons, so I only juiced 1 1/2 of them, but it was kind of overpowering. It was an OK dinner for something light and easy to make, but I won’t make it again. There are just too many other recipes to try out!

1. Preheat the broiler. Arrange the prosciutto in a single layer on a foil-covered baking sheet and broil until crisp, 3 to 4 minutes. Set aside.
2. Toss the mushrooms, celery and onion with the EVOO and lemon juice; season with salt and pepper. Arrange on a platter and top with the arugula and parsley. Drizzle with truffle oil, if using. Break up the crispy prosciutto and scatter over the salad.