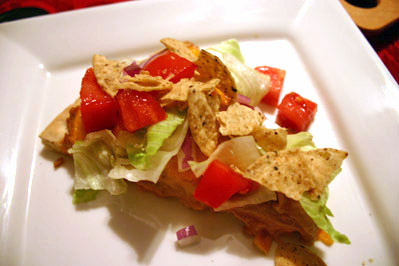 Last night, I decided to try to recreate a pizza that I used to get all the time when I lived in Indiana. I know that as a New Yorker now, I shouldn’t ever crave Pizza Hut again, but the ones in Indiana are the best in the country. It’s not gourmet pizza, but they had this taco pizza that was SO good that I crave it pretty often. So I decided to give it a try at home.

I used a ready made pizza crust, spread refried beans on it, and topped it with shredded cheddar cheese. I baked it until the cheese was melted and bubbly, and then topped it with lettuce, tomatoes, red onions and tortilla chips. Then I dipped each bite (because you have to eat this with a fork and knife!) in some taco sauce and a little ranch dressing. It was pretty darn close to the one that I love, but the crust wasn’t the same. It was still a nice and easy meal for a weeknight. I may try other brands of crusts to get a little more flavor, and I might even try putting taco sauce or seasonings on it while it bakes. The one at Pizza Hut comes with ground beef, but I always ordered it without meat. If you were going to add it, you’d have to cook it on the stove top first with taco seasoning, then put it on top of the beans, top it with cheese, and then bake that in the oven.

This is the base that comes out of the oven: 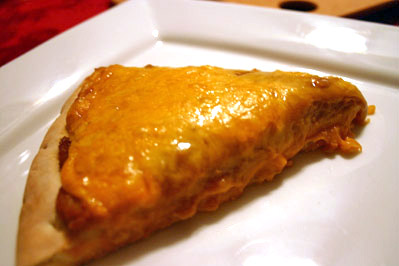 And this is what it looks like with all the goodies on top: