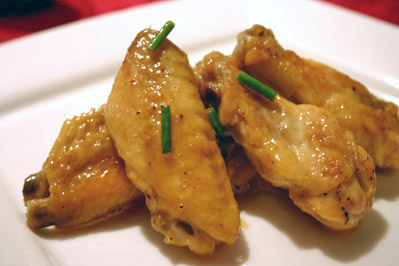 I got Tyler’s Ultimate last week and was really excited to try something out of it. I didn’t have the book handy when I was making my shopping list though, so I got the recipe from food network’s website. It looks like it’s a little different (the one in the book called for lime zest, and the amounts are a little different) but the basics of the recipe are the same. This turned out AMAZING! There were only 2 small issues – I’ve never cut through bones before (and it kinda weirded me out), and I bought fresh cilantro today from the store and when I was cutting it up…let’s just say there was something unpleasant in with my lovely herbs. So I opted for some fresh chives from my garden instead.

Anyhow, this recipe was wonderful! Dino ate a TON (I cut the recipe in half and only had a few myself, and there aren’t any leftovers!) and I’m excited to try them again another time but with cilantro and the other changes that are in the cookbook version.

Rinse the wings under cool water and pat dry. Put them in a bowl, drizzle with olive oil and season well with salt and pepper. Toss to coat with the seasoning. Then spread the wings out on a baking sheet and roast about 25 minutes until the skin gets crisp and brown, and the meat is tender.

While you wait, throw the butter, red curry paste honey and soy sauce into a blender. Season with salt and puree. Scrape into a big bowl. When the wings come out of the oven put add to the bowl with the curry butter. Squeeze the juice of the lime over the wings. Give it a toss and you’re done. Garnish with cilantro.