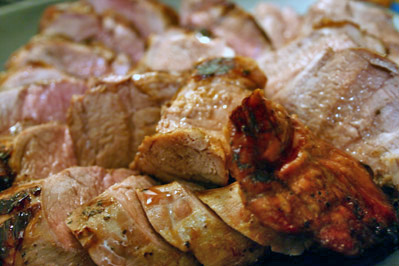 This recipe turned out good, but there are serious issues with the recipe. First off, you have to cook the glaze on the stove for MUCH longer than 8 minutes to get it to reduce to 1/2 cup. Secondly, this is the second recipe I’ve seen that says to cook a pork tenderloin for 15 – 20 minutes. This is simply not enough time. I ended up cooking it for 40 – 45 minutes. Since the glaze was sweet, it burned on the pan, but luckily not on the actual meat. What a mess. It turned out to be tasty, but I was embarrassed making it for company when my kitchen was filled with smoke. I’d try this one again, but I’d make some MAJOR adjustments to the timing.

For safety reasons, a portion of the glaze is kept separate to baste the pork while raw and during cooking; the remainder is served with the cooked roast. The glaze will thicken significantly if made ahead; microwave at HIGH for a few seconds at a time, stirring after each heating, until glaze is thinned.

Combine juice and sugar in a medium saucepan over medium heat, and bring to a boil. Cook until reduced to 1/2 cup (about 8 minutes). Pour half of glaze into a small bowl; set aside.

Sprinkle pork evenly with salt and pepper. Place pork on the rack of a broiler pan coated with cooking spray; place rack in pan. Brush pork with half of glaze in saucepan. Bake at 450° for 15 minutes or until a thermometer registers 145°. Baste pork with remaining glaze in saucepan; cook an additional 5 minutes or until thermometer registers 155°.