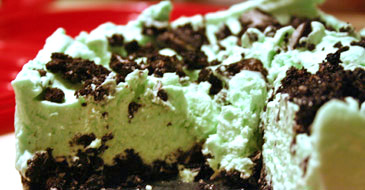 I went to a BBQ last night, and I was in charge of dessert. I didn’t want to turn on the oven in this heat, so I made two no-bake desserts. They were both pretty good! The first was a Grasshopper Torte, and it was VERY refreshing and minty. It tasted like ice cream! The changes I made to try to make it slightly healthier were to use low-fat milk and reduced fat Oreos. I used butter instead of margarine though. Ah well, you have to splurge sometimes!!

Combine the cookies and the margarine. Reserve 1/2 cup for topping.

Press remaining crumbs onto bottom of 9-inch springform pan. Place in freezer while you make the filling.

The next dessert I made was also good, but it was so hot outside that it kinda fell apart when we tried to slice it. In the future, I’d put it in the freezer for about 30 minutes prior to cutting it so that the pudding doesn’t slide out. I made one big tart instead of 6 mini ones. I used a box of reduced fat instant vanilla pudding, and threw in some blueberries and almond slivers. Nothing is better than fresh fruit in the summer! 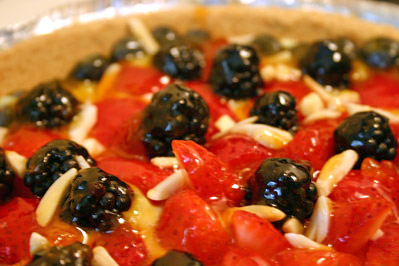 Place preserves in a small microwave-safe bowl, and microwave on high for 1 minute or until melted.

Spoon 2 tablespoons pudding onto each crust; top each serving with fruit. Spoon 1 tablespoon preserves over each tart.