I waited until the last minute today to figure out what I was going to make for dinner. I’ve been pretty good at planning out for the week, but it’s been so hot lately that I’ve lost some motivation. So I found two recipes with lots of fresh and crisp ingredients that could be eaten cold. They both turned out wonderfully!!

This main course was great! It was a very light and crisp thing to eat on a hot summer day. It wasn’t spicy, but a little chili sauce would do the trick if you wanted it to be. The only changes I made were that I used thin straight cut rice noodles instead of soba, i used a seedless cucumber, and I didn’t toast the sesame seeds. This would easily adapt to whatever fresh veggies you can find, and it would be great with some grilled chicken on top as well. 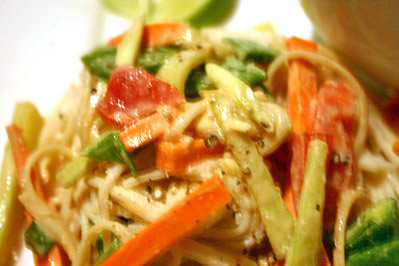 Cook noodles in a large pot of boiling water until just tender. Transfer
hot noodles to large bowl. Add all veggies, toss. (Salad and dressing can
be made one day ahead. Chill separately). Toss with dressing, season with salt and pepper. Sprinkle with sesame seeds.

The soup tonight was really refreshing. Dino usually doesn’t like soup, but he had 2 bowls. It has a lot of flavor for having so few ingredients. Make sure you’re in the mood to do some chopping before you take this one on! 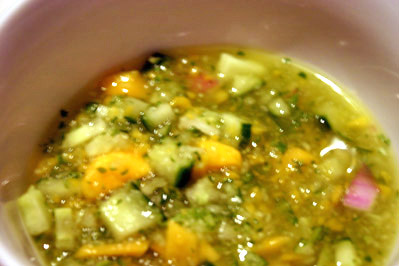 Just before serving, stir in cilantro and 1 1/4 teaspoons salt.