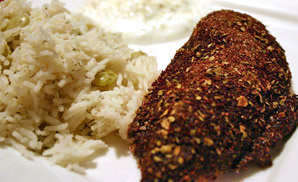 This next recipe was a disappointment, and not because of the recipe, but because it appears that the sumac that I bought had been altered. It was salty! Dino was sure that I must’ve accidentally added too much salt, but I swore that I didn’t. so I went and grabbed what was left of the sumac, and it looked like there were other things in it. There were clear/white crystals in there with the deep burgundy sumac. Sure enough, a taste test proved that it was salt. I’m very disappointed in the store that I bought it from for not labeling it properly.

Anyway, we scraped off the excess “crust” (which didn’t really crust, probably because I used boneless, skinless chicken breasts instead of a whole chicken) and it was decent. I can tell that the flavor could be good, if it weren’t for all that salt. So this definitely has possibilities for a future trial. For now, it won’t be getting a rating.

Rinse chicken and pat dry. Stir together 1/3 cup sumac, oregano, pepper, salt, and cinnamon; mix with oil and water. Rub herb mixture onto the meatiest side of each chicken piece. Lay pieces in a single layer, spiced side up, in a 10- by 15-inch pan. Bake in a 425 degree oven until meat at thigh is no longer pink (cut to test), about 30 minutes. Accompany chicken with yogurt and additional sumac to add to taste. Makes 4 servings.