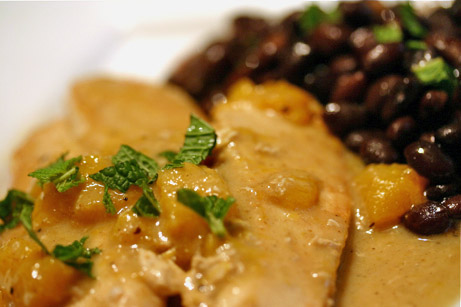 This meal was really great! I added a favorite side dish of ours to a recipe from the newest issue of Every Day with Rachael Ray. Yum! 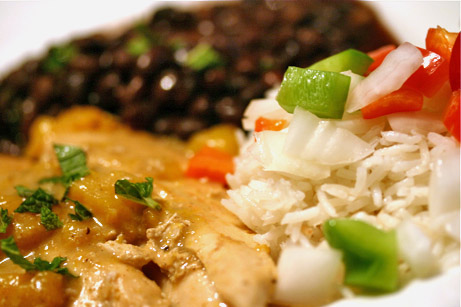 This dish was really good. I wasn’t sure how much I’d like mint in the beans, but it worked surprisingly well.

1. In a large skillet, heat the oil over high heat. Add the chicken and cook, turning once, until browned, about 3 minutes. Add the coriander, and stir for about 30 seconds. Add the chicken broth, lower the heat and simmer for 3 minutes, scraping up any browned bits; transfer to a plate. Add the coconut milk to the skillet, increase the heat and boil to reduce by half, about 4 minutes. Stir in the mango and cook until warmed through. Return the chicken to the skillet, toss and remove from the heat; season with salt and pepper.
2. Meanwhile, in a medium saucepan, simmer the black beans over low heat. Stir in the lime juice and 3 tablespoons mint.
3. Divide the beans among 4 plates. Top with the chicken and remaining mint.

On the side, I made a dish that my father-in-law and I learned from some Brazilian friends. You chop up some bell peppers and an onion, throw them into a big bowl with about a tablespoon of white vinegar and 2 tablespoons of water. Let it hang out in the fridge for a while and serve it over rice. It’s really nice and crunchy, and the longer you let the vinegar work, the more juice the peppers create. It’s really simple and satisfying. It’s awesome the next day too…but be warned that eating this much raw onion & pepper will definitely take a toll on your breath! It’s totally worth it. 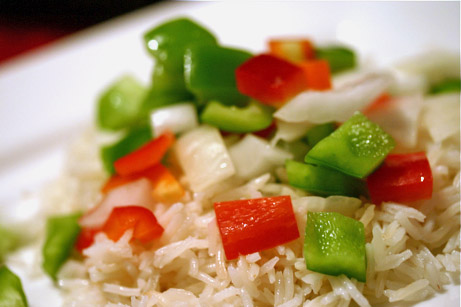