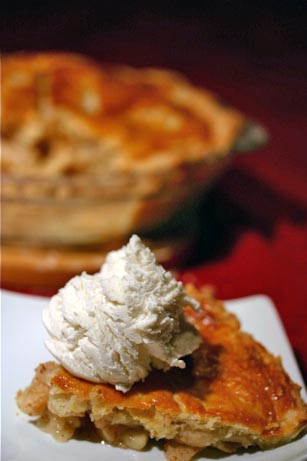 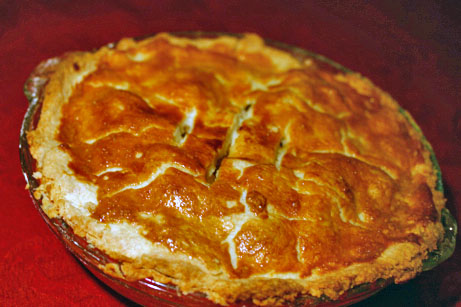 We’re huge fans of Pushing Daisies. Ever since we first saw the apple pie with Gruyère baked into the crust, we’ve been wanting to try it. Dino came across a blog that has a recipe and some great narrative. I used all butter for the crust (I wasn’t going to try to find leaf lard), and we added some nutmeg and allspice. The only confusing thing about the recipe is that it tells you to add all the ingredients to the apples, so we ended up putting the beaten egg in with them. Oops! We poured it out and beat another one for the top of the crust.

This crust has awesome flavor! I’ve heard of people melting cheddar on apple pie, but this was really different and delicious!

Preheat oven to 400 degrees F. Take dough out of fridge.

Peel, core and slice apples into quarters. Slice each quarter thinly. Mix with other ingredients.

Roll smaller piece of dough into circle twelve inches in diameter. Pile apples into pie plate, scraping any juice on top of the apples. Place smaller round of dough on top of the apples. Seal two crusts together, brush with the beaten egg, and make three parallel slits in the top crust to allow steam to escape.

Place pie on a cookie sheet to catch any drips, put in oven, and reduce oven temperature to 375 degrees. Bake 50 minutes to an hour, or until you can see the filling bubbling up between the slits in the crust. Cool on a wire rack at least 20 minutes before serving.

Making pie dough is governed by three principles. 1) Use leaf-lard. Spare me your gasp of horror; leaf lard makes the most tender pie crust around and unlike Crisco, contains no transfats and doesn’t leave an unpleasant, soapy taste in your mouth. Don’t use lard from the grocery store; it is most likely rancid. Leaf lard should smell pure. Buy from a butcher, or order here. And okay, if you are utterly opposed to lard, you may use butter. 2) Leave pea sized lumps of butter in the dough. Under the pressure of the rolling pin, the lumps of butter flatten into thin sheets that alternate with the flour. In the heat of the oven, they create the flaky layers that characterize the best pie doughs. 3) Keep in mind the pie ough rule of escalating insanity. The more your pie dough makes you weep, gnash your teeth and lie on the kitchen floor convinced that the whole enterprise is a complete disaster, the more likely it is that your pie dough will be heavenly. Beware the pie dough that is easy to work with; it will most likely end up dry and tough.

While everyone from Cook’s Illustrated to Rose Levy Berenbaum recommends the food processor for quick and easy pie crusts, I have never had luck with it. The food processor overprocesses the dough, and my crusts end up tough. If you use the food processor, only use it to cut the butter into the flour. After that mix with a fork. If you don’t use a food processor, a pastry blender will do. You can use your fingers, but you run the risk of melting the butter with the heat of your hands, ruining the effect of those pea sized pockets of butter. Luckily for me, my icy, grim reaper fingers pose no such threat to the pie dough.

Mix flour, salt, sugar and Gruyere in a large mixing bowl or bowl of a food processor. Using a food processor, pastry blender, or your fingers, cut in the lard until no large pieces remain. Add the butter, and cut into flour until the largest pieces of butter are the size of large peas.

Remove flour-butter mixture from food processor, if using, and place in a large mixing bowl. Sprinkle ice water over flour in increments of one tablespoon, toss with fork after each addition. (Try not to add too much extra water, but I usually end up going over the recommended amount.) When dough clumps together when squeezed in your palm, gather dough together into two disks, one slightly larger than the other, wrap in plastic wrap and refrigerate overnight.