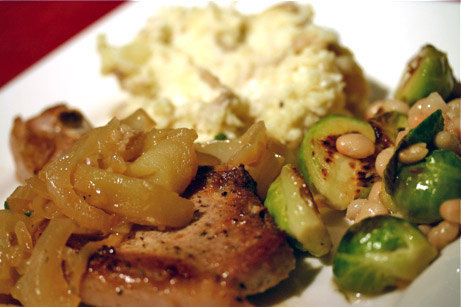 Tonight’s dinner was great! I found a couple new recipes, and added some homemade mashed potatoes (this time I used some fingerling potatoes and mashed them with milk, sour cream, cream cheese, butter, salt & pepper).

The pork chops were really good. The horseradish really adds a nice kick, which makes it a different take on a seemingly normal pork chop dish. 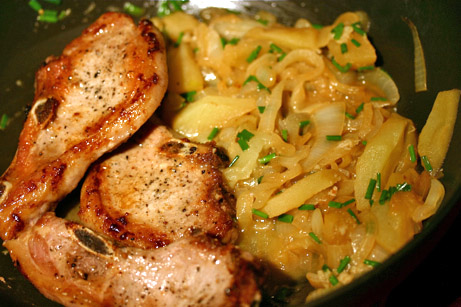 Nothing evokes the fall season like a plate of pork chops and apples, but we upped the ante with spicy horseradish, which adds new verve to this timeless dish.

Heat oil in a 12-inch heavy skillet over medium-high heat until it shimmers. Sauté chops, turning once, until browned and cooked through, about 8 minutes. Transfer to a plate and keep warm, loosely covered.

Reduce heat to medium and add onion, apples, and 1/8 teaspoon salt. Cook, stirring occasionally, until onion begins to soften, about 3 minutes. Add wine and water and simmer, covered, stirring occasionally, until apples are tender but not falling apart, about 12 minutes. Stir in horseradish, chives, and meat juices from plate. Season with salt and pepper. Serve chops with sauce.

I had never made brussels sprouts before tonight. I had only eaten them once – at Iron Chef Michael Symon’s restaurant, Lola, in Cleveland. These turned out awesome! I made a few changes – I used navy beans and Parmesan cheese. The flavor was really nice! I was surprised – I know a lot of people hate brussels sprouts. Dino usually hates them, but really liked them prepared this way. He even went back for seconds! I think I’ll try more recipes with them now that I’ve had a successful dinner including them. 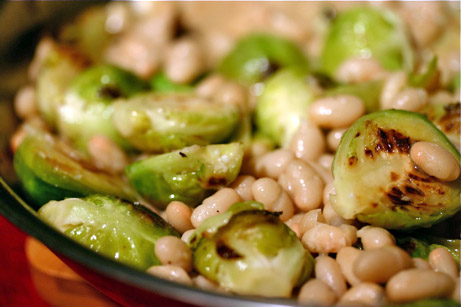 A coarse grating of pecorino cheese adds a little creaminess and tang to this dish, but it’s equally delicious without it.